I have been organizing an annual guy’s ski trip for over 30 years. Anywhere from 20-30 of us head to the Peruvian Lodge located at the base of the Alta Ski Resort in Utah. This year (2019), we had 30 people, with several fathers bringing their sons who are in their 20’s and 30’s. The eldest member turned 84 that weekend.

It’s always a wonderful weekend and incredibly relaxing in that everything is right there. Good food, fireplace, hot tub, warm pool and a lot of bantering (that would be the mild term). We do revert back to middle school behavior (at best). My wife keeps asking me the question if guys ever grow up. I think the answer is obvious. It’s a great break for all of us. 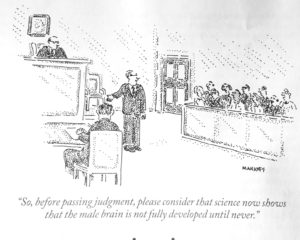 We ski in smaller groups and we usually meet at a restaurant in the middle of the mountain called “Watsons” at 11:30, just before the lunch crowd arrives. I don’t ski quite as well as I used to and decided to come in a little early and relax. I purposely worked on enjoying the fantastic view of the valley and could not have been in a better state of mind. It was also one of the few times when I was well ahead of the curve with regards to saving enough seating for 18 people. The restaurant was almost empty.

I was sitting at the end of two tables that seated 12 and had placed my gear on a table for six just across the aisle. Four of my group appeared at 11:20 and sat down at the large table. My plan was working well, and I was having a great time. We were talking about the morning, which included skiing on fantastic snow. Suddenly I turned around and there were four boys between nine and eleven, who had pushed aside my gear on the other table and were sitting down.

I pointed out to them that I had another six people arriving shortly and this table was saved. “Where are they? We’re here! You can’t save tables.” They were clearly veteran Alta skiers, but I had never heard of that rule at any ski resort in over my 50 years of skiing. I also didn’t see any signs that I couldn’t save a table. I was caught off guard and firmly restated my case. At that point four more of my “ buddies” sat down at the large table. There were also two older women immediately behind the boys and they started hissing, “Just give them the table.” As I continued my protest, one of the boys looked at me said, “We’ll give you five minutes.” I was getting more confused and flustered. I don’t remember that I would have talked to an adult in this manner when I was 10 years old. Usually skiers just walk on by, since saving a table for your group is the norm (so I thought).

Thrown under the bus

Then I asked my friend, Bill, to come over and sit down at the embattled table with me, since the larger table was continuing to fill up with members of my group. Instead of coming over and helping me out, he said, “Come on, why don’t you let them have it?” while looking directly at them. I was now well into looking like a “grouchy old man” and the women continued to hiss at me. I caved in, but I wasn’t happy. My tranquil meditative state had been severely compromised, and I was being thrown under the bus. My “friend” fist-bumped them and they said, “Thanks!”

Three minutes later, another seven people showed up and had no place to sit. This wasn’t going well, and my group thought all of this was hilarious. I wasn’t happy with them, the kids, the women or me. I really was upset, and it was just over a table. My friends know how much stress I deal with every week and were surprised how triggered I was over such a non-issue. Of course, the more frustrated I became, the harder they laughed – even though I was holding the space for them. I haven’t been that angry in a while. What the heck happened?

The image that jumped into my head was that of Gulliver being tied to the ground after being captured by Lilliputians. Gulliver’s Travels was written in 1726 by Jonathan Swift, and was a disguised commentary on world affairs, as well as on human nature. The book is divided into four sections. The first is about being captured by the Lilliputians, who were one twelfth his size. He was tied to the ground by hordes of them while he was sleeping. They wanted to seal the deal by blinding him. He had to navigate some tricky situations to eventually escape.

I was trapped by people a fraction of my size and age. My “adult” friends finished me off. The similarities to being pulled into the Abyss of chronic pain weren’t subtle. It’s always a combination of factors that pull you into the hole. They add up quickly and escape becomes essentially impossible. When I was pulled into the Abyss in 1990, I didn’t see it coming and it took me 13 years to come out of my tailspin. And it was by pure luck that I did. It took me years to figure out what had happened to me, and longer to learn how to share the concepts with my patients. A few of the variables that can trap you are:

This list is only a hint of the multiple ways  you are trapped by mental or physical pain. You can’t see them coming and the adversities keep pummeling you from multiple directions. The worst aspect of it is that since there doesn’t appear to be any viable solutions offered to you, where is the endpoint? You eventually lose hope and retreat into an angry survival mode.

I felt trapped and any one of the variables alone would not have stopped me from holding onto my treasured table. I didn’t anticipate all the angles of the situation that took me down. A major one was my own sense of not looking good to the other parties or to me. I was a “grouchy old man.” I am still not sure, as I am writing this piece a couple of weeks later, that I’ve completely let it go…………