I first met Georgia when she was 15 years-old. She had undergone a fusion for adolescent scoliosis at another hospital. Her post-op pain was much worse than usual and nine months after the surgery she was still experiencing severe pain. Normally, pain from a fusion such as hers is gone within a month. As I put my hand on her back, it was clear that she had a deep wound infection. After taking her back to surgery a couple of times to clean up the infection, I felt satisfied I had solved her problem. I had no idea about the rest of her story and that I would be a part of it 18 years later. Here is her story.

My scoliosis surgery at age 14

I have lived with severe, chronic back pain, since a failed back surgery eighteen years ago. When I was 14 years-old I underwent surgery to correct scoliosis. Hardware was place in my thoracic spine (T6 to T12). Within a few short weeks following the surgery, I began experiencing an unusual amount of pain. My spine surgeon, Dr. A told me that the pain that I was experiencing was normal and that it would get better. The pain didn’t get better, in fact it got worse. 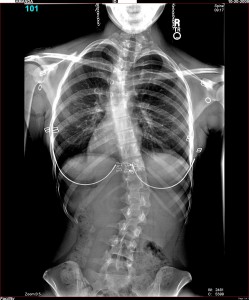 During the next eight months following my surgery, the pain became so intense that I couldn’t attend high school. Every time I returned to Dr. A to tell him how much pain I was in, he told me that the pain was not a function of the surgery; rather, I was a “chronic pain patient”. Operating under this assumption, I engaged in months of painful physical therapy, chiropractic treatments, and eventually I was referred to a chronic pain specialist, who put me on methadone to control my pain.

The spine surgery was infected

I eventually developed flu-like symptoms (vomiting, headaches, listlessness and high fevers) that didn’t remit. After eight months of dealing with ever worsening back pain, and repeatedly being dismissed by my surgeon, I went to a different spine surgeon for a second opinion. This surgeon was Dr. David Hanscom, and the year was 1995. Within a short time, he determined that it was likely that I had a staph infection in my spine. I was taken in for emergency surgery the next day to clear the infection. Dr. Hanscom was right, and so was I.

Just one week before my thirty-third birthday, I found myself unable to stand in an upright position – the muscles in my jaw, neck and back were in spasm; and I had a headache so severe that I felt nauseated. No amount of Ibuprofen, analgesic rub, or time laying on an icepack made a difference. I felt trapped and hopeless. Over the years, since my surgeries as an adolescent, I tried every alternative therapy known to man, and yet I still experienced pain on a daily basis. It finally hit me; my pain was not going to go away — it was getting worse. At the age of thirty-three, I felt like an eighty year-old woman. I thought that maybe another surgery would be my ticket out of the chronic pain hell that I had been living in for almost two decades. I had sworn to myself that I would never undergo another spine surgery, but I was at the end of my rope, and desperate for relief.

Just before this pain flare-up, I had been dealing with a very difficult client at work. I could not control the trajectory of this issue, or the behaviors of my client; and coincidentally, my back pain was out of control. I had the sense that my back pain and stress with work were loosely connected. I was stressed with work, so it stood to reason that my muscles felt tense. I had no idea just how interconnected my back pain and stress levels actually were.

I have long thought that I had back pain because there was fundamentally something wrong with my spine. I have scoliosis, and had a corrective surgery that failed, and a traumatic experience post-op, with a spinal infection that went ignored, and could have killed me. I also experienced a great deal of anxiety since early childhood, and this anxiety increased in severity, as I got older.

Pain and anxiety are connected

Essentially, I deduced that I had two major issues in my life: back pain from a failed surgery, and anxiety and depression. What I know now is that these two issues are not independent of one another; rather they are one in the same.

It was by divine intervention that I learned about the work Dr. Hanscom is up to now. After visiting Dr. Hanscom’s website, I immediately ordered his book, Back In Control, and read it in two days. Once I finished his book, I signed up for the Hoffman Process, which is something you will learn about in his book. I then made an appointment with Dr. Hanscom, and was able to get in quickly because I was a patient of his eighteen years ago. 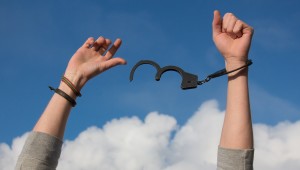 Back in Control blew me away, and it gave me a spark of hope. When I saw Dr. Hanscom in March of 2013, he told me that there was nothing wrong with my spine. Of course, I still had scoliosis, but my spine was solid. I was shocked to learn this! All of these years, I believed full-heartedly that my scoliosis and failed surgery was causing my pain; and for all of these years I was wrong. My pain was a function of pain pathways created by my central nervous system, post-surgery. Essentially, my pain was, practiced pain. This was a concept that was hard for me to grasp! But my faith and trust in the man who saved my life when I was young, helped keep me open to these new concepts.

As I write this review, I have no back pain. This seems miraculous! The information provided in Back in Control, and my experience participating in the Hoffman Process, has radically changed my life in more ways than I could have ever imagined. I am so grateful!

Instead of my pain being constant, it comes in waves, and once I identify the pattern in my thinking that is the root of my pain, the pain goes away – completely. I used to have back pain 95% of the time, now I have back pain 15% of the time, and the numbers keep improving the longer I stay engaged in this work. Many days, I am pain-free. I don’t wake up with headaches anymore, I don’t grind my teeth at night, and I no longer take anxiety medication to get through my day. I simply don’t need it. I feel more alive than I can ever remember feeling, even pre-surgery. Many of the things that I have struggled with for years seemed to have vanished.

Be open to possibilities

My hope for you is that you read Back In Control, and consider going to the Hoffman Process. No one deserves to live in chronic pain. It tramples your quality of life, and negatively impacts the lives of those around you. Be open to the fact that the source of your pain is probably not what you think it is. We all deserve to be liberated in both mind and body. Living in pain is devastating and dehumanizing.

You are so much more than your physical pain, your psychological challenges, and your patterns.