My son, Nick, has been a competitive freestyle mogul skier since he was 14 years-old. He is an extraordinary athlete and within three years of beginning his skiing career he won the Duals event at Junior Nationals. He was focused, passionate and it appeared that he was well on his way to a spot on the US ski team.

Life doesn’t always go as planned. He hit some difficult personal circumstances and began to underperform. One incident was a high-speed fall where he missed hitting a tree by just a few feet. His left ski hit a small rock throwing him forward. He landed on this left shoulder and dislocated it. He felt for the first time that was going to die, as he hit the snow. He began to ski “not to lose”, which can’t work at a world-class level of competition. The harder he worked the worse it seemed to get.

He began to work with a performance coach in Seattle, David Elaimy in 2006. He was 22. I sponsored him and his best friend, Holt, to work with David over the next several years. Nick climbed to 5th in North America on the NorAm circuit. Holt went on to win the National Championship in 2007. It was a tough competition for Nick, as he did not make finals after a fall on the top jump.

In 2008, Nick had good shot at the National Championship. Our whole family and David Elaimy were watching Nick warm up on a tough course in Killington, VT. He appeared to be one of the few skiers who was mastering the steep course with firm snow. Suddenly he pulled over and sat down. With a very slight twist his anterior cruciate ligament in his left knee popped. He rehabbed quickly after surgery to ski the next season. Then he popped the cruciate ligament in his other knee. He again worked hard enough to compete the next season. Then he partially tore his ankle in practice as he over-rotated on a back flip in heavy snow. His next injury was a ruptured the disc in his lower back between his 4th and 5th vertebrae. There wasn’t much pain but it weakened his left quadriceps. He had already experienced nine concussions. You get the idea. He wasn’t giving up easily.

The final straw seemed to be a golf injury. He was driving the cart with his left leg hanging out the side. He was relaxed and not paying too much attention to driving. He caught his foot between the cart and a railway tie as he crossed a small wooden bridge. His ankle snapped requiring yet another surgery. After a lot of conversation we all decided that continuing to ski did not seem like a good idea. I was personally relieved. He was finishing school and had a great job lined up.

He decided to compete again. I was not supportive, but at age 29 it was clearly his decision. It was not only risky, it seemed as if he didn’t have much of a chance. To qualify for a US ski team spot and a World Cup spot he had to finish a combined first or second over two days at a national qualifying event. He lined up a sponsor and began training in September for the December competition. He traveled to Australia, Europe, and Canada, working extremely hard. The first week while in Canada the rope tow was not open. He climbed the hill over 150 times just to practice one jump. 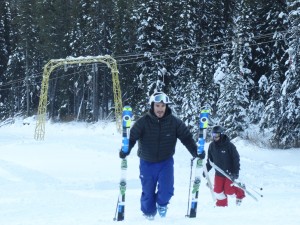 But another major problem had evolved in addition to his injuries. He had lost his consistency and every year would ski poorly under the pressure of the national qualifying competition. It became a head-trip and even the pattern of failure became predictable. His top jump was an impressive backflip with a full twist and he would ski a great top 2/3 of the run. On the bottom jump he would over-rotate, sit back just a little, and immediately be out of the competition. For three years in a row, it was the same mistake. It didn’t seem to matter how many times he practiced the jump or how well he did in the warm-up runs. He wasn’t laying down winning runs under pressure. He only had the first two runs of the season to finish in the top two and that was it.

It is always tricky when giving your children advice when they haven’t asked for it. Although Nick is mentioned throughout my book, Back in Control, he hasn’t quite gotten around to reading it. (Nor has my wife or daughter). I suggested that he engage with the expressive writing exercises, which is the foundation of the DOC project. It is the tool that begins to break up the cycle of racing thoughts. He politely listened without a response, but actually began to implement it. He had also done the Hoffman process a few years earlier and had continued to use some of the visualization and somatic tools.

Every December the national qualifying event is called “Selections”. The top two finishers are guaranteed spots on the US ski team. This year it was held in Winter Park, CO. It is a two-day event held on Thursday and Saturday.

On the first day of competition he qualified 13th out of a field of 75. As the top 16 skiers get a second run he made finals. There is no carry-over from the first run and he finished 6th, which kept him in the hunt for a top-two finish.

On Saturday he qualified 11th. It was an excellent accomplishment and was a great run. But anything less than a first or second on the final run was not going to cut it. He finally did it!! On the finals run he missed a first place finish by one hundredth of a point. He skied the run of his life under intense pressure.

They took the top six skiers for a “super finals” and he did it again – he finished second by the smallest of margins.

Making the US Ski Team – Not

For all of us that have watched him compete it is hard to describe how great it was to see him pull this off after years of so much focused effort. His overall standing for the two days was 3rd. It wasn’t quite a guarantee but often a 3rd spot opens up on the US ski team and he had clearly elevated his game. Then his dream came true.  A 3rd spot opened up. But the coaches gave it to the 4th place finisher who he had soundly beaten.

Five years ago he would have been out of his mind for weeks. Making the US ski team had consumed him for over half of his life. And he was upset – for about two days. By the time he told me a week later he had let it go and had enjoyed a wonderful holiday with his girlfriend and friends. I flew over the next weekend to ski with him and he really had moved on. We had a great few days together. The elephant’s noose

I asked him how he had raised his level of skiing to almost winning the event. That is when he told me he had been doing a lot of the expressive writing and immediately destroying it. I was surprised and pleased that my son had actually listened to his father’s advice. He had increased the writing a lot during the competition week. A friend of mine asked him about the Hoffman process. Nick started thinking about the events and reminisced that he actually had used many of the Hoffman tools during the competition.

Before his final “almost-winning run” he was dealing with his fears of failing under pressure. In the starting gate he took his ski pole and wrote the word, “fail” in the snow and then used his skis to bash it. Hoffman graduates will recognize it as one of the basic tools of the process. He proceeded to ski the run of his life.

From my perspective his “winning run” was letting go of being passed over for a US Ski team spot. He seemed to move past it far quicker than I did. Dealing with adversity is maybe the one most important traits that will allow you to live an enjoyable and productive life. I realized that my son had grown up.