Once is not enough in forgiveness

The trick is to become so practiced

that you can sing while you do it,

that when you see one beginning to sprout

you will by instinct

lay your fingers in the earth,

and set it free. 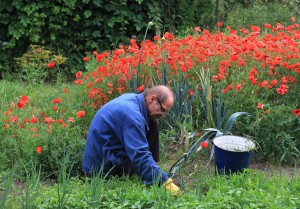 The beginnings of the DOC project

The DOC project originally started by me sharing some stress management tools that had pulled me out of a deep burnout. I had no clue that chronic pain was solvable, but I wanted to help my patients cope with it. When I began to address sleep, I noticed that many people were having less pain, which caught my attention. I had no access to psychologists, so I began to recommend David Burn’s book, Feeling Good. It is book-based cognitive behavioral therapy. People began to feel better.

I was also continuing to deal my extreme anxiety, but I was not breaking loose. I was also suffering from over a dozen other physical symptoms. As I continued to rapidly spiral down, as my stresses became extreme, I was forced to acknowledge that I had some anger. I had not a clue that I had anger. Not only was it there, it was my core.

I honestly don’t know how I got through the next six months or what tools I used to process my anger. I had no anger management skills and I also did not realize how much perfectionism fuels it. I thought I simply had “high standards.” I learned of the many disguises of anger. I now know that anxiety and anger are the same entity, representing the feeling caused by elevated stress hormones. Somehow, I got through It with a major step being that I understood what being a victim was and made a simple decision to come out of that role. My anxiety dropped through the floor and many of my physical symptoms disappeared.

Many years ago a patient gave me the book Forgive for Good, by Dr. Fred Luskin. Although patients had done pretty well with the tools I was offering, it is when Forgive for Good entered the picture that people began to go pain free. Pain and anger pathways are so intertwined that you cannot calm the pain pathways until you can let go of anger. “Neurons that fire together, wire together.”

Dr. Luskin and I have become friends and have put workshops on together. He taught me that forgiveness is an ongoing daily process. You will be frequently triggered. They key is becoming aware when you have slipped into the victim role and use your set of tools to come out quickly. This poem is especially relevant in light this concept

Alec is a friend and classmate of my stepdaughter. He was 26 and talented in the performance arts, as well as writing poetry. His poem above is remarkably insightful for any age. Think what the world would be like if we practiced the concepts he simply lays out. How often does the word, “forgiveness” cross your mind?

You cannot forgive too deeply or too often. Could you sing while you do it? Think what your life could be like.