In our society today, it’s commonly believed that the higher the opinion you have of yourself, the more confident, happy, and successful you’ll be; high self-esteem is held up as the ultimate goal. In actuality, however, this couldn’t be further from the truth: the pursuit of self-esteem is a destructive concept that is merely the manifestation of man’s thirst for power, driven by anxiety and the need for control.

The consequences of endlessly striving for self-esteem aren’t just dire for the individual, but for the society as a whole, as those in charge – of families, companies, countries, anything — judge others harshly, driving them into the ground on their path to power. At its worst, the quest for greater self-esteem leads to despotism, war, and mass murder, blocking world peace. What can be done about this dangerous scenario? The real key to harmony for us as individuals and as a society is not self-esteem but compassion. Only by practicing compassion – for ourselves and others — can we make our world a more peaceful one. The road to compassion starts at the point where you become aware of your own efforts to inflate your self-esteem, which can be traced back to anxiety.

Let’s look at compassion first. Compassion is now recognized as vital force in our society: in fact, there is a group (in which I am a partner) called “A Charter for Compassion” founded by Karen Armstrong, a prominent theologian. The group’s mission is to promote compassion on an international level. It’s a great and important cause but we have one major challenge: while the idea of using compassion to bring about peace (in our world and in ourselves) has been around for a long time, there has been no lasting change.

In her book, Twelve Steps to a Compassionate Life, Armstrong points out that 2,500 years ago, Confucius had remarkable insight about the importance of compassion and worked to spread the word about it. In spite of his significant efforts, though, he felt that he’d failed to convince any world leaders to act in a compassionate way. The challenge continues today.

Now let’s consider the origins of our inability to achieve world peace: the pursuit of self-esteem, which is rooted in the universal feelings of anxiety and anger. Here’s how the sequence unfolds: we don’t like to feel anxious, so when the feeling starts, we struggle to gain control of the situation that’s causing it. If we can’t gain (or retain) control, we become angry. Anger covers up the anxiety, making us feel more in control and more powerful. It’s a vicious cycle in which those in power see no logical reason to give it up.

In trying to gain more self-esteem, we inevitably compare ourselves to others, which results in harsh judgments. This is problematic for several reasons: first, these negative feelings don’t help you enjoy your day. Second, although you might intellectually believe that “all men are created equal,” actively judging anyone – whether it’s a friend or a homeless person on the street — means you haven’t internalized this belief. Third, negative judgment leads to ill treatment of others (even if we display a veneer of civility). Lastly, self-esteem has odd blinders; whatever defines us most is what we most often judge in others. Think about this for a while.

Do you often make negative judgments? Ask yourself the following questions: 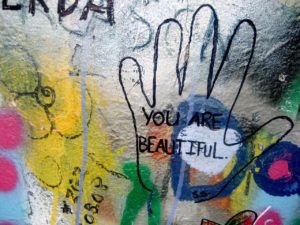 We really all are equal

In answering these questions, remember that every human being is flawed. The beauty of this realization is that it allows us to see that not only were we are all created equal; we truly are equal. Being judgmental interferes with our ability to enjoy the human experience at the deepest level, which is tragic for you and everyone you come in contact with. When you judge someone as being “less than” you, it enables you to rationalize some pretty bad behavior. In labeling that person, you’ve lost the capacity to view the world through that person’s eyes. It’s the antithesis of compassion. The essence of compassion is awareness.

What is really odd about this process is that you may focus so hard on the few traits you define yourself by that you become detached from the feelings of worthlessness you possess in multiple other areas. This disconnection can and will lead to aberrant behaviors. Here’s a recap of the sequence:

Remember that in the end, no matter how hard you work on your self-esteem, there will always be people in your “target” zone who are more competent, skilled, wealthy, etc. So at the same time you feel superior to many, you also feel inferior to many. By the way, how are you keeping score?

Also keep in mind that instead of making you happy, self-esteem pretty much guarantees that happiness will always elude you. For example, suppose you are brilliant in your field of work but are physically out of shape and cannot get on top of it. Does your brilliance overcome your negative feelings about your body? The answer is: probably not. There are a million traits to feel good or bad about, which is one of the reasons that self-esteem is so ineffective in allaying anxiety. It eventually becomes destructive.

I recently had a conversation with a young professional about self-esteem. He told me that in any social situation that he is in he feels like he is the most intelligent person in the room. It does not matter who is in the group or if it is in his area of expertise. He then went into a somewhat complicated explanation why he thought this was the case. I could only feel sorry for him as I realized how much of his life energies were being consumed by this process.

We’ve established that anxiety and the resulting negative judgment lead to the pursuit of self-esteem, which, in turn, results in power struggles. The resulting judgment blocks awareness, which is the foundation of compassion. As self-esteem is so widely promoted how is world peace even a concept? What is the solution to this problem? First, we have to start at the individual level and deal with our anxiety/judgments. The most effective technique is a strategy called reprogramming, which essentially “resets” your nervous system via the following tactics: 1) awareness, 2) detachment, and 3) reprogramming.

The first step is to become aware of your anxiety/judgments. One effective method is to either write down or speak your judgmental thoughts, which allows you to separate from the, which accomplishes the second step.

The detachment process doesn’t get rid of your judgments; they will still be there the next time you interact with the same person. However, in separating from your thoughts, your negativity is no long running the show. You don’t have to like this person but you’ve created a situation where the possibility of liking him or her one-day exists. At a minimum you can do business or interact with them without it disrupting your peace of mind. This third step is the reprogramming part of the process.

Note that it may be tempting to try and suppress your anxiety-driven judgments, but this won’t work; the anxiety that lies beneath our judgments is a mental reflex, and impossible to deal with in any way that might seem rational.

I have an ongoing discussion with my patients about why suppressing their judgments doesn’t work. For instance, suppose they’ve decided to turn over a new leaf and not be judgmental of a person they don’t like, such as a coworker or relative. The next time they interact with this person, what happens? In trying not to think negative thoughts about the other person, they focus on these thoughts even more, literally “firing up” their neurological circuits of judgment. It’s a problematic way to run one’s life, since lack of awareness results in detached and even bizarre behavior.

There are other, effective methods for breaking the negative cycle of self-esteem:

Once you become aware of the destructive nature of pursuing self-esteem, you can implement tools to change, creating the possibility for peace within you and around you.

The concept of world peace has been in my thoughts my entire life. Though I have at times been hopeful, it currently seems like we are headed the wrong direction. In fact, sometimes I feel that much of the free world is heading back into the Dark Ages. Many parts of the world still live in the same conditions as the Dark Ages, subject to absolute control by a few leaders, with severe consequences for breaking the arbitrary rules. Can the human condition ever overcome its own nature? What would it take for us to achieve world peace? This is the question that needs to be answered; otherwise let’s quit talking about it and deal with the reality that it’s never going to happen.

Compassion is contagious. The more compassionate you are with your partner, children, friends, coworkers, or a stranger on the street, the more likely they will be compassionate to those around them. 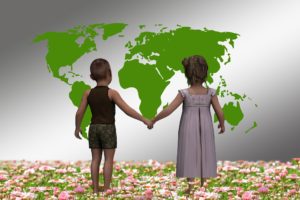 Most everyone would agree that world peace is a good idea, so how do we go about achieving it? Besides being compassionate to your fellow man, it helps to let others know about the destructive nature of self-esteem.

This is the idea put forth in the book Influencer: The Power to Change Anything written by people who are highly skilled in creating change. The book is about pinpointing which behaviors need to be modified in order to create the desired result. For example, if you wanted to improve people’s dental hygiene habits, you might think you should display this message on every billboard in the country: “Practicing good dental hygiene results in healthier teeth and gums.” This tactic wouldn’t change a thing, however. But if you systematically educated the population about regular and correct methods of brushing and flossing your teeth, you’d achieve your goal.

Let’s consider this idea in the context of world peace. You can promote the concept that world peace is a good idea, but you won’t get anywhere unless you specify to others what behaviors need to change. One might be to stop working on their self-esteem and instead, practicing awareness and compassion. True lasting change can only occur one person at a time and everyone is important.