Stimulating your brain to form new circuits first involves awareness of what already is, separating or creating some space between the stimulus and response and then redirecting your attention. Visualization is an effective method to create new pathways around your embedded pain pathways. Part of the chronic pain experience is feeling stuck, feeling like your life will never change. But if you can picture a different existence, one in which you can move with greater ease and do more things, you can change your world.

Visualization techniques have been used in the athletic and performing arts world for many years. There have been numerous studies demonstrating the effectiveness of these methods. Detailed focused visualization is an effect method of Reprogramming.

My son, Nick, is a mogul skier. He is an excellent skier and has come close to making it all the way to the top. He and his best friend Holt have engaged in performance training, which utilizes skills involving both awareness and visualization. They have not only elevated their performances, but they have also been able to handle the stress of the inevitable failures that are inherent in the sport.

In March of 2007, our family was watching the competition for the US National Championship in moguls. My son, Nick, had had a bad day and did not make the finals. Everyone, including Holt was upset. Nick had been talked into trying a trick he hadn’t mastered and just couldn’t pull it off in the heat of the national championship. Holt had a great run and had qualified 2nd. The top skier on the US ski team had qualified third. The top twelve skiers out of a field of fifty get a second run. There is no carry-over of points from the first run.

It was around 4:00 in the afternoon by the time the final run was winding down. The sun was low and the light was flat. Flat light makes it much harder to see the shapes of the moguls. The top US ski team skier took his run and it was almost flawless. He had a giant score at 27.2 out of a possible score of 30. Usually a score above 26.5 has a high chance of being the winning run. Holt was the next skier. We all were wishing him the best but just hoped that he would have a good run and possibly finish second or third. He came out and scored a 27.6 to win the US championship. We were ecstatic and dumbfounded. It was an incredible run under any circumstances, but almost impossible to pull off under that kind of pressure.

How did he pull it off?

At that point, I did not have that clear of an understanding of the reprogramming process. I could not understand how it was different from positive thinking. I spent the next day picking Holt’s brain, asking how he was able to perform so well under those circumstances. Here’s what he told me. It is first of all critical for the performer to acknowledge the anxiety that is associated with the upcoming performance.

Holt was extremely anxious and he knew that the score he had to beat was high. However, instead of suppressing his anxiety he stuck with it and experienced it. He then concentrated on the feel of the breeze on his face and the edges of the skis on the snow. When his mind would wander off into the potential negative story of how he might fail, he’d  pull himself back into the current sensations that were immediately around him. By doing this, he’d made a choice to detach, effectively saying, “I am not going to be controlled by these thoughts and emotions.” Next he visualized the first few turns and was then able to just ski his run. He also had been practicing these techniques the whole season.

In the past, Holt said his prior strategy would have been to suppress his negative emotions. It would have fallen under the category of  positive thinking: “Don’t’ worry about the other skier’s score.” “Don’t’ be nervous.”  “I can do it.” However, the energy spent on suppressing negative emotions would have taken away from the energy and focus he needed to perform. He instead chose an alternate neurological pathway that was the one he needed to maximize his performance. 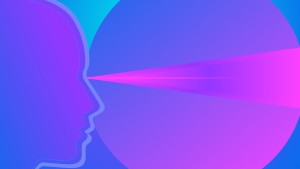 He inadvertently used the sequence of 1) awareness, 2) detachment, and 3) reprogramming to optimize his chances of laying down a winning run.  He was aware of the score of the prior skier and also his level of anxiety. Instead of suppressing he engaged his fears and separated from them. He used “active mediation” and visualization as reprogramming tool. As he felt the breeze and the listened to the sound of the snow under his skis he was connecting himself to the current moment. Reprogramming through visualization is a powerful method: you completely play out the event in your head so that it’s the only program that’s playing. It’s important to mentally experience the smallest detail from beginning to end.

The power of visualization was demonstrated in a study done with volunteers learning to play the piano. The researchers set it up so that two different groups were learning to play a simple scale. One group was taught the skill with an actual piano. The other group was taught by visualizing themselves playing the scale. When they were randomly tested on their ability to do the scale, the results were the same. The experiment was done again with volunteers who were basketball players. One team was asked to learn a play on the court, while the others merely visualized the play. Again, when they were tested, the results were similar.

The tools are the same for dealing with chronic pain. It is critical to become aware of all of the variables that affect your pain, including fear. There are many ways of detaching from your pain as well as an infinite number of possibilities to move forward. Can you connect with your day? Are you able to visualize a productive and fulfilling life? The stakes are much higher than a national championship.