I love golf. I love the social aspect of it. I love to hit a great golf shot. There is nothing quite like hitting the “sweet spot” and feeling the ball take off like a rocket. The problem is that I don’t get to experience that sensation very often. I have “potential,” but I am not a good golfer. I have taken dozens of lessons with little improvement. In 1995, my golf instructor told me that he had never seen one of his students take so many lessons, practice as hard as I did, yet have so little success. 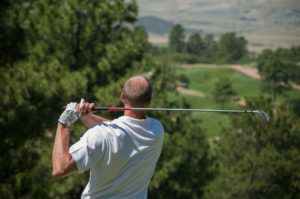 Thanksgiving weekend of 2008, I was playing golf with three close friends. All were significantly better golfers than I. The one thing I have accomplished in golf is the ability to have a great time on the course, regardless of the score. This group was one I had played a lot of golf with, and we were having a wonderful day in the bay area of California at my brother-in-law’s club.

The first three holes engendered optimism. I had two pars and a bogey. I stepped up to the fourth tee and promptly hooked my ball left out-of-bounds. My second shot off the tee was fairly long but off to the right. I was laying three. My next shot didn’t need to be so ambitious.  Nevertheless, I decided to go beyond my comfort zone and hit a low shot that would fade to the right under a branch that was about 60 feet off of the ground. I hit the shot of my life. It sailed off of my club and began a slow descent to the right heading towards the pin. The tree branch was one inch too low. Not only did my ball hit the branch, but it bounced 40 feet to the left out of bounds. I ended up with a nine.

At this point, I was debating the merits of continuing to keep score but decided to record the nine and move on. The next couple of holes were a struggle, but finally woke up and had a good run in the middle. The 16th hole took me down a bit with some remarkably bad shots.

I stepped up to the par three 17th hole having to work a little harder at enjoying myself. It was a beautiful day and the course has a panoramic view of the whole bay area, including the Golden Gate Bridge. I pulled myself into that reality after a couple of deep breaths.

The hole was 165 yards away, downhill, and to the right. My three friends, of course, had hit three nice shots. I stepped up with an eight-iron feeling that I did not have much to lose. I hit the sweet spot and killed it. But it was clearly going to be too long. The ball was drifting to the right and headed off the back of the green. It was one of those bittersweet moments of feeling like I had hit the perfect shot but still needed some luck just to salvage the hole. The ball landed, took one bounce, directly hit the flag and dropped into the hole.

I will never forget that moment. Everyone started to cheer. I was not sure that it had really happened. We could not stop yelling. The rest of my life seemed somewhat small. The best part was that I was able share it with my friends. Even as I am writing this story, the memory of that event still gives me chills. There are not words to describe the depth of enjoyment and pleasure I felt that day. One my playing partners gave me a beautiful plaque with a picture, the ball, and the scorecard commemorating the experience.

Even though I am not a good golfer, after taking so many lessons, I have a reasonable understanding of the golf swing. I have taught over a dozen people to play, most of whom have long surpassed me. One of those people is my best friend, who is my golfing buddy most weekends. We have a great time relaxing and coaching each other. My only solace as I routinely watch him beat me is that he must have had a great teacher.

Golfing on a busy Sunday afternoon

One weekend, my wife and I joined my friend and his wife for a Sunday afternoon of golf at a course in Alameda by the bay. It is an executive course that is nicely laid out and fairly challenging. We arrived early and spent a couple of hours at the driving range. My friend worked with my wife and I worked with his wife. (It is a lot safer that way).  His wife had not played much golf, and I was hesitant to give her too many things to work on. Every concept I gave her she mastered in about five swings. An hour later she was hitting her driver over 160 yards. My wife was also enjoying her time working on her swing. I was getting very relaxed, which is not my normal state.

As we headed over to the course, I had some anxiety about the situation. I have learned over the years that no one cares about your golf score except you. But most experienced golfers care about the pace of play. I have difficulty enjoying a round when the group in front of us is holding up play. However, my frustration level can become extreme if I am in a group that is holding up the rest of the course. His wife had never been on a golf course and my wife had only been on one a couple of times. Somehow, we decided to have a friendly competition and keep score between the families. Golfers know that any competition slows the game down and I did not think that this was a great idea. As I was only one out of four, with one of the others being my wife, I lost that discussion.

The course started out empty, and we were having a wonderful afternoon. Our wives had some great shots. I was playing with my usual inconsistency and my golfing buddy was playing with his usual consistency. At the fourth hole, another group began to have to wait for us. Between the fourth and fifth hole we had to walk past the starter’s booth. She walked out and yelled at me, “You have taken 80 minutes to play four holes. You have to step it up.” My relaxed state of mind began to wane. We let that group play through the fifth hole but by the seventh hole we had three other groups stacked up behind us. My suggestions to my group to help speed up our pace of play were going unheeded. I was losing my mind, and my frustration level was a 12 out of 10. I was additionally frustrated in that I was with some of the closest people in my life, and I particularly wanted my wife and I to have a great experience on the course. I wasn’t saying much, but my wife was not fooled and became upset at me being upset. You all know how that works. Now my frustration factor was at a 20 out of 10. 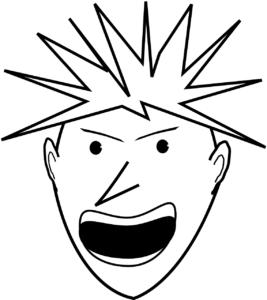 I stepped up to the ball. The hole was a flat par three that was 208 yards. I took my five-wood and hit a low shot that started out to the right and began to drift left. The ball landed about 20 yards in front of the green, continued to roll left towards the hole, hit the flag and dropped into the hole.

The power of anger

There was not a flicker of response inside of me. Nothing. I was so frustrated about holding up the rest of the course that I just turned around and walked away. Everyone else was excited. I felt nothing. Even when I walked up to the hole and physically pulled my ball out of the cup, there was a slight sensation that this was sort of cool that I had hit another hole in one. But that was it.

The contrast between the two experiences was dramatic. As much pleasure that I had etched into my mind from my first hole-in-one, I have only frustration burned into my head with the second hole-in-one. Even as I am sitting here writing this story and thinking about that moment, it causes me to feel a pit in my stomach.

Anger has the power to destroy every part of your life that is meaningful and good. I am unsure how to commemorate this second hole-in-one.