Generation Z and Millennials as a group are struggling. In spite of living in an era of unprecedented opportunities, they are the loneliest groups. Cigna Insurance company conducted an online survey in 2018 (1) on over 20,000 people over the age of 18.  They found that over 50% of Americans are lonely based on the UCLA loneliness scale with the most affected group being Generation Z (ages 18-22) and Millennials (ages 23-37). Students were more lonely than retirees. 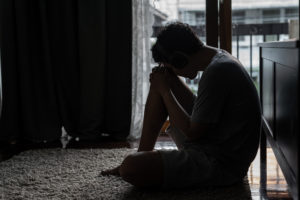 Loneliness causes many physical problems including a higher mortality rate equivalent to smoking 15 cigarettes per day. Mental health problems continue to increase and approximately 1 in 6 adults suffer from a mental health condition. Most also suffer from loneliness. (1)

Anxiety is the driver

I have observed from working with many patients and my own experience with loneliness during my ordeal with chronic pain, that there is a circular interaction with anxiety, anger and becoming isolated.  For many, I feel the starting point is anxiety, which is the pain.

There are an endless number of reasons for humans in this day and age to have disruptive anxiety. This has been endlessly discussed in the media. However, once it kicks into gear, there is no turning back and it will become relentlessly progressive. Since is an automatic unconscious survival response that is much more powerful than your conscious brain, you can’t control it or solve it with rational means. You also will never be rid of it, since without it, you would not survive for more than a few minutes.

The key to lowering anxiety is learning to assimilate it into your life. It is intended to be unpleasant, since it is your basic warning system. As you learn to work with it and quit fighting it, you will be able to lower your stress chemicals and de-energize it. Anxiety both protects you and also allows you to navigate new challenges.

The interaction I experienced while in pain was that I was crippled with anxiety in the form of disruptive unpleasant thoughts that evolved into an obsessive compulsive disorder (OCD). I had become a major spine surgeon by suppressing anxiety and wasn’t connected to it. I also thought anxiety was a psychological problem when it actually is simply a physiological reaction to a mental or physical threat.

As my anxiety progressed, I became more isolated. My patterns of thinking changed dramatically, and I was consumed with thoughts of self-deprecation and why would anyone want to hang out with me? This was occurring in spite of me historically being a social person to a fault. I had a wonderful group of friends from middle school on. There was no new activity I was not up for trying. In college, I took more than a full academic load, worked heavy construction 10-20 hours a week, played intramural sports, and spent a lot of time with my friends. I don’t remember sleeping much.

As I spiraled down with progressive anxiety, I became severely depressed. I now know that depression is a group of symptoms driven by anxiety. The isolation progressed rapidly over five years, in spite of having warm and very nice people around me. I couldn’t connect. I was so busy trying to survive, I couldn’t reach out to others. As others tried to reach out to me and failed, they eventually quit trying as hard, which only made it even harder for me to. I don’t have the words to describe the feeling, but it was crushing, suffocating and one of most intolerable experiences I have ever had and, even worse, there did not seem to be a way out. I use the word, “Abyss” to describe being in chronic pain. I think the loneliness was a step beyond or below. Even thinking about it 20 years later is causing my stomach to knot up. 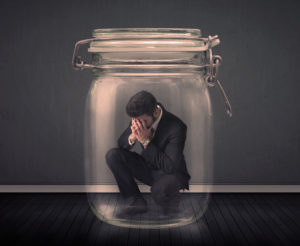 My depression became severe. I lost all hope in spite of aggressively seeking professional help and reading many self-help books. One that I picked up was, Darkness Visible: A Memoir of Madness, where the author described his own struggle with major depression. (2) What struck me was that he was famous, wealthy, and had recently received a lifetime achievement award for his literary excellent. In spite of it all, he was miserable. What struck me about his story, is that he didn’t find or offer a solution. He  had nowhere to go and just remained in one spot. I couldn’t explain what happened to me but I felt a deep shift. That is all I can say. I did not immediately begin to heal, but I somehow realized that I was on the wrong track in my endless pursuit of a cure. The answers where inside of me. In an odd way, I gave up, which turned out to be the eventual answer.

It is OK to be on “The Bottom”

It is OK to be depressed. Anxiety is normal and fighting it gives it more power and it does become disruptive. Your brain will develop wherever you place your attention, especially if you are suppressing. By remaining still, I gave myself some space to heal. I become aware of many aspects of my life and experience that weren’t possible while I was traveling so fast. I quit trying to fix myself and inadvertently allowed my brain to heal. I became more connected to me.

This song is written and performed by my nephew, who I have spent many hours talking to about anxiety, depression, and life. His struggle with it was epic but he not only made it through, he is thriving. One of his gifts from the ordeal is having insights into the magnitude of the problem and has a deep appreciation for life. This song, The Bottom, reflects his perspective.

Learning to be with yourself, including your fears, is key to moving forward in life on your terms and not at the mercy of other’s opinions. It is also much easier and you are able to reach out to others and be aware of their needs. It works the other way around in creating an upward spiral. I have rekindled many friendships because I have healed, but my connections are also part of the healing journey.