Obsessive Compulsive Disorder (OCD) is an extreme of form of anxiety. It is characterized by a relentless assault of unwelcome intrusive thoughts. I suffered from OCD for several decades well before I knew what OCD meant.

My anxiety became disruptive one night in 1990 when I experienced a panic attack while crossing the 520 bridge over Lake Washington. I had no idea what had hit me and I tried to simply tough it out. It was the wrong decision. By 1997, my anxiety became extreme and I was desperate. I picked up the Seattle Times, which had a front page article reviewing a book, Tormenting Thoughts and Secret Rituals by Ian Osborne. He was a psychologist who had experienced OCD. It was a relief to know that I was not alone in experiencing these vivid, crazy thoughts. It turned out that I was experiencing “internal OCD”, which does not have any outward behaviors, such as counting and hand washing. I was experiencing endless disturbing thoughts and then countering them with “good” thoughts.

The harder I tried to fight these thoughts the more vivid they were becoming. I only realized later that your brain develops where you place your attention and I was inadvertently reinforcing them. I read several medical review articles on the problem and learned that the prognosis is poor, although there was some success with behavioral therapies and meds. I would even snap a rubber band on my wrist when one of these thoughts occurred. I tried everything imaginable and nothing worked. Not only was I desperate, I was actively suicidal. If you told me that I had to live the rest of my life in that state, I would still choose to check out. Physician Suicide: My Journey

Raw unrelenting anxiety is intolerable. It is possibly one of the worst experiences of the human existence. I now understand that anxiety is not primarily a psychological issue. It is a neurochemical response to the environment. All living organisms have an avoidance response to danger. Humans have the additional problem that unpleasant thoughts are processed in the same region of the brain as adverse physical input and the chemical response is the same. Emotional pain and physical pain are equivalent entities.

There is a certain fascination with observing people with this problem and is often referred to in a jocular manner. I recall a TV show where a man was interviewed who counted out a thousand pennies every day. Many of you are familiar with the TV show, Hoarders. I could never watch it because I was raised in a house where my mother was a hoarder. She saved everything including plastic milk and butter cartons, magazines and newspapers. The bedrooms and hallways had two to three feet of junk and the only reason it was not to the ceiling is because the four of us children would clean out the house every three to four months. It was confusing in that we always thought we were helping and she would become incredibly angry at us. It is easy to look at the Hoarder show and be judgmental. They only deserve compassion. Their suffering is extreme and their lives are being consumed by anxiety. This is not the way that life was supposed to be. Additionally, consider the other manifestations of OCD that can be almost as problematic:

Although the incidence of classic OCD is reported to be only about 2-3% of the population, everyone has anxiety. It is difficult to define at what point it becomes disruptive to one’s quality of life. Here is my word play on the progression:

Since anxiety is body’s automatic response to a real or perceived threat, it is part of the unconscious brain; which is approximately one million times stronger than the conscious brain. You cannot control it. Any attempt to do so simply places neurologic energy in that direction and reinforces it. The essence of creating disruptive anxiety is trying to control it. We all know and it has been documented that trying not to think about something causes you to think about it more. (1)

There is now research emerging showing that thought suppression causes damage to the hippocampus of your brain, which is the area of your brain that process short and long-term memory. (2) Indeed, in chronic pain your brain physically shrinks and you lose some ability to process information. (3) Fortunately, it returns as you heal. Thought suppression has also been shown to be linked to opioid addiction. (4)

You cannot control your thoughts or emotions without paying a significant price. I was a master of suppression to the point that I did not know what the word anxiety meant. Even if you feel you are largely successful in suppressing it, you will experience some or many of the other physical symptoms connected to a fired up nervous system. I had 16 of the over 30 possible manifestations during the worst part of my ordeal. It all sounds dismal and the general feeling about anxiety disorders, especially OCD, is that you can manage the symptoms but not generally solve OCD. I am not only fine but am thriving.

Once you understand that anxiety is the pain you are able to move past and through it. That is how the DOC process was born and has continued to evolve. You will discover which approaches work and don’t work for you and use them indefinitely.

As you learn to live with uncomfortable feelings they will lose their power over you. Here is a poem that came across my desk that is at the core of solving disruptive mental pain.

Turning to face my fear,

I meet the warrior who lives within;

Opening to my loss,

I gain the embrace of the universe;

I find fullness without end.

Each condition I flee from pursues me,

Each condition I welcome transforms me

And becomes itself transformed

Into its radiant jewel-like essence.

I bow to the one who has made it so,

Who has crafted this Master Game.

To play it is purest delight;

To honor its form–true devotion.” 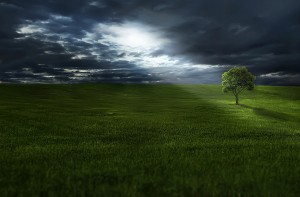 Anxiety is at the core of the human existence. You cannot survive without it or thrive living under its threat. Live with it, experience it and become comfortable with it. Then you will become free in a way you never imagined was possible.