Over the last several years, it has become apparent that family dynamics are a major factor in perpetuating or solving chronic pain. I am on a continual journey to learn more about these forces. At one of my annual spine society meetings, I became involved in a conversation with three colleagues who had all been married for over forty years. I was intrigued and we began discussing some ideas of what had worked and bemoaning some of the challenges. I shared my observation about relationships being similar to being in a rock tumbler. I thought I had come up with an original metaphor, but one of them sent me this piece written by a member of the Benedictine Order.

“Now, as for stability, check out the way stones are polished in a tumbler. It all starts with these rather nondescript, encrusted rocks that only a trained eye could see had something precious about them. Add a bit of water, a good amount of sand or other annoying grit, and the rocks tumble and tumble until they come out shiny gems. All their rough edges, the hardened muck and mire of ages – it vanishes! The process is so simple, the results seem almost unbelievable. 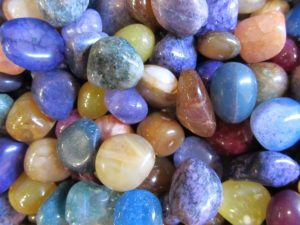 Well, maybe, maybe not… Ask one of those rocks! While the rock and all of its companions are being polished into jewel-like luster, they (and all that grit) are continually scraping and jostling each other. And let’s not forget all the water that facilitates things!

The gritty water essential to both enclosure and stability is sometimes annoying to the tumbling community. But that doesn’t remove its usefulness. The spinning employed, at times intense, is the harsh reality of objectivity and outside-referenced truth. Like any rock tumbler or community, everybody gets polished, one way or the other. How very like Benedictine stability in community and the enclosure of the monastery! Community is any connected group, workplace, or home. Enclosure is your home, as well as your heart.

Without being obsessive, or making the people who live with you crazy, guard what comes into your enclosure –  both heart and home. There is a switch on your TV. There is a less visible, but equally effective one on your mouth. There is a useful one on your heart and thoughts, too.

Guard the people who tumble about getting polished with you, too, especially the annoying ones. While they are tough to be around, they are the ones doing you the most good! Without the abrasions they share with you, the process would take much longer.”

My colleague’s final comment was, “Well, it sure looks like I am being called to pay close attention to the tumblers in my life!”

What about when the tumbling becomes too extreme? When the force of contact goes beyond abrasion and leaves scars? After talking to hundreds of couples dealing with chronic pain, I became aware of people caught in a rock-crushing relationship.

A rock crusher takes large rocks and breaks them down into smaller and smaller pieces. The end result is usually gravel, but can be as fine as sand. There is no resemblance to the original rock, and it certainly isn’t polished. 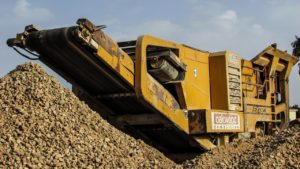 When people are angry, they are reactive and often aggressive to those close to them, whether it is at home or work. When you are consumed and trapped by pain, anger is an understandable response. However, the support system that you need to move forward is destroyed and pushed away.

The bigger problem with acting out when you are angry is that you lose awareness of the impact of your behavior on those around you. Anger completely blocks awareness, which is the essence of any successful relationship. Lack of awareness is the essence of abuse, which can range from mild to extreme. It isn’t logical that you would treat people you love so poorly, yet in my clinic, we heard about it on a daily basis. The partner or spouse was usually the target, but often children were in the line of fire. Anger is only about survival and is destructive. Protect your family from your pain

The essence of  a relationship

While mulling over the differences between a rock tumbler and a rock crusher, I came across this piece written by one of my medical school classmates. He has also been married for over 40 years.

“For couples so eager to call it quits and throw in the towel on your relationship because everything isn’t ‘perfect’…here is some food for thought:

Lifelong commitment is not what most people think it is. It’s not waking up every morning to make breakfast and eat together. It’s not cuddling in bed until both of you fall asleep. It’s not a clean home filled with laughter and love making every day.

It’s someone who steals all the covers, and snores. It’s slammed doors, and a few harsh words at times.

It’s stubbornly disagreeing and giving each other the silent treatment until your hearts heal, and then you find forgiveness.

It’s coming home to the same person every day that loves and cares about you in spite of (and because of), who you are.

It’s laughing about the one time you accidentally did something stupid.

It’s about helping each other with the hard work of life.

It’s about swallowing the nagging words instead of saying them out loud.

It’s about eating the easiest meal you can make and sitting down together at a late hour because you both had a crazy day.

It’s when you have an emotional breakdown and your love lays down with you and holds you and tells you everything is going to be okay. And you believe them.

It’s about still loving someone even though sometimes they make you absolutely insane.

Loving someone isn’t always easy – sometimes it’s hard. But it is amazing and comforting and one of the best things you will ever experience.” 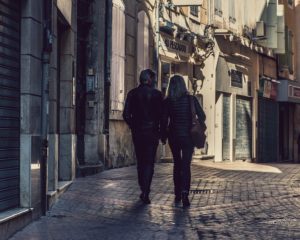 Committing to staying in the tumbler with your partner is a humbling and rewarding experience, although it would be nice if there was an easier way. And we all need to acknowledge the different roles that we play in one another’s lives. Are you tumbling or crushing?

This idea extends to all relationships.

What about work? If you are the supervisor, are you listening and supporting your staff, or are you overly focused on enforcing the rules?

What about your children? Do you remain flexible and adaptive, or do you take advantage of your power over them?

Are you sticking with toxic relationships out of fear?

Are you willing to continue to work on a friendship when he or she has behaved badly, but expresses a sincere desire to change?

No one can answer these questions but you.

So again, I ask – are you in the tumbler or have you jumped out?  Are you being crushed or crushing? Becoming aware is the first step in moving forward.