Commit to a Daily Practice

I went skiing on Christmas day, 2008, with my son Nick and his best friend Holt.  Holt was the 2007 US mogul champion.  My son just won a national mogul event the two weeks earlier.  The three of us were standing on top of a cornice at Snowbird, Utah.  For you non-skiers, a cornice is a snow formation that occurs at the top of a mountain ridge.  As the wind blows the snow up the mountain a drop-off of 10-20 feet will be formed.  Most skiers make a diagonal trail down this drop-off, which is fairly simple and safe.  US ski team skiers often jump straight off of them.

Just below the cornice was a chute that was about 20 feet wide at the top but only about six feet wide about 2/3 of the way down.  About 100 feet down on the left there was an outcropping of rocks and it was about 200 feet before it opened up. 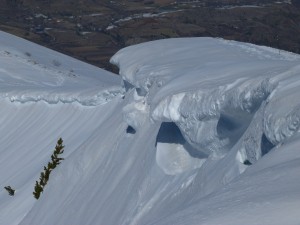 Holt looked at it. I said to him, “Holt, you are on the US ski team.  I don’t think your coaches are going to be thrilled with you skiing down this kind of terrain.”  He looked at me and then immediately jumped into the chute.  He skied about 75 feet straight down, made a gentle turn to the right, another gentle turn to the left and ended up in a large bowl.  Nick went to the right and jumped from a 15-foot cliff into the same chute and made the same turns into the bowl. They were traveling about 40-50 mph when they reached the open bowl. This was simply an undoable chute for most human beings.  It was clear that if they did not remain committed to their decision that they had a very high chance of a serious injury.

Mind you, Nick’s and Holt’s certainty came from hours upon hours of practice over many years. They each knew they could make that jump because they were supremely confident skiers and had done tough jumps before. Visualization – Holt’s Winning Run

Commit to scheduling time daily with doable tasks that will stimulate your brain to change. Eventually, with repetition, these more functional behavioral patterns will become your baseline and you will be able to transform your life into one that you want. Don’t hesitate in your pursuit of your new life—commit to yourself and your new reality.

Nick’s Winning Run – Off of the Hill