In August of 2013 I put on a 5-day workshop at the Omega institute in Rhinebeck, NY with 11 participants. The other two faculty were Dr. Fred Luskin from Stanford and my wife, Babs Yohai, who is a professional performer (tap dancer). We designed it to address many variables that affect the perception of chronic pain. 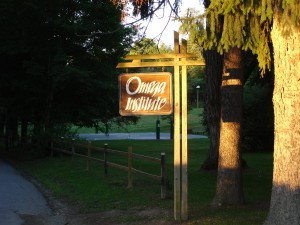 One antidote for anxiety is structure. As pain induces relentless anxiety we created a tightly scheduled structure. We presented videos of patients who had healed, bringing hope into the equation. Major emphasis was placed on forgiveness presented by Dr. Fred Luskin, author of Forgive for Good. The frustration around chronic pain disconnects us from others and ourselves. You cannot move forward until you can let go.

The factor that we wanted to most address was the problem of social isolation. I have long-witnessed that most of my patients in chronic pain become socially isolated. It is difficult to want to be with other people when you are miserable. Unfortunately you then have more time to think about your pain and really etch in the pain pathways. It is somewhat of a disaster.

The participants were paired a partner for the week. We spent time sharing past experiences and remembering who we really were. Bab’s role turned out to be one of the more important one in that she took us through many somatic exercises, including several hand rhythms. The most enjoyable one was, The Cup Song.

We all struggled, especially me. We began to laugh and the whole mood of a bunch of adults struggling with “The Cup Song” began to change. By the middle of the week many people began to experience less pain. A year later at least half of the group that we have kept in touch with has continued to do well.

A letter from a participant

This is a letter from one of the participants who initially struggled and continued to struggle for a while. I wasn’t sure which way he would go. He is a remarkably nice person and was a major factor in the success of the week. He had the courage to stand up and share his new interest in learning the xylophone – except he had not yet learned to play it. The fact that he was willing to be vulnerable at that level instantly changed the feel of the whole room. On Wednesday evening he recited three poems, again helping all of us feel more comfortable sharing.

Here is his letter and new poem about one year after the workshop:

I haven’t the language of emotion! I never learned it. I haven’t learned it, yet. I think this may have something to do with my block in writing down thoughts, too. If this is an accurate assessment, I think the whole poetry thing is a good prescription.

Amadinda – after James Wright, author of “A Blessing”

Just off the path through the porch of my house

The keys rest on a rope sling

I stand with hands hovering

If the music inside me ever gets out

I will burst into blossom.

We held a second Omega seminar in August of 2014 with 20 participants. Again we witnessed many stunning turnarounds in a short period of time. Others are gradually figuring it out.

What we learned is that the workshop is not a formula. It is a structured environment where people could learn, relax, open up, and connect. In the end it is people that heal each other.