We have a cat, Sophia, who is remarkably attached to my wife. She may pay some attention to me when my wife isn’t around. She rolls over multiple times when my wife comes home. She will come on command to lie on my wife’s chest when we are watching TV. She runs under the bed when I try to hold her. Such is life. 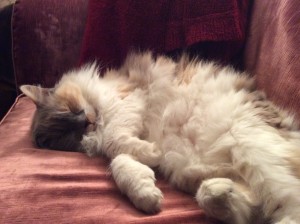 Like most cats, she is clean and easily learned to use her litter box. About a year after we adopted her, she began to mess on the carpets and sometimes on our bed. We somewhat panicked and called the vet. She didn’t have a lot of suggestions but did point out that cats have strong behavioral patterns and can’t be trained like a dog. The episodes would occur when we were packing for a trip. Then she would pee in the suitcase. We were assuming that she was “angry” and acting out. After we were back home for a few days, things would settle back into a routine.

Last Thanksgiving, we took our usual precautions of locking her out of the bedroom and keeping the suitcases somewhat out of sight. I woke up early and saw that she had thrown up twice and created two unpleasant messes both up and downstairs. I also noticed she was meowing frequently and following my wife everywhere she went. It finally hit me that she wasn’t a malevolent cat with an agenda. She was anxious and it was manifesting in creating physical gastrointestinal (GI) symptoms. She had irritable bowel syndrome (IBS). 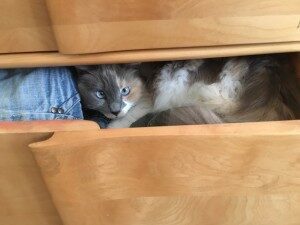 The essence of IBS is the occurrence of multiple disruptive GI symptoms. They are unpredictable in their type and timing. Symptoms include:

The symptoms are more frequent in females and are associated with multiple other physical symptoms. It is one of the most common reasons that people seek medical care. I am going to simplify the cause and effect. Anxiety is the sensation that is experienced when your body is full of stress chemicals such as cortisol, histamines, endorphins and adrenaline. Any mental or physical threat results in different levels of these hormones depending on its severity. Unpleasant mental input (thoughts and concepts) are more problematic because humans can’t escape their thoughts. This results in chronic exposure to an adverse chemical environment and people become ill. The list is almost endless but here are some of the ones listed as being associated with IBS:

There is a paper out of Sweden (1) that documents a strong association between chronic stress and all autoimmune disorders, including the inflammatory bowel disorders. All these symptoms are included in the list of problems that are associated with chronic pain. The constellation of these symptoms is what I have termed, “Neurophysiologic Disorder” (NPD). Other names include:

The bottom line is that a sustained adverse chemical environment causes physical symptoms. In addition to the above symptoms there is a higher incidence of heart disease, obesity, diabetes and early death. (2) This unconscious survival response is about a million times stronger than the conscious brain and can’t primarily be addressed by psychological means, although it has a role. The key to solving these symptoms is to use techniques to change the body’s chemistry to a more favorable environment. When you are truly relaxed, laughing and at play, your body is full of oxytocin (love drug), serotonin (antidepressant), dopamine (reward drug) and GABA chemicals (similar to Valium). This is a great chemical bath and you will feel relaxed along with a high chance that your physical symptoms will abate.

I thought I was so smart because I figured out that Sophia had IBS. Then I looked it up on the Internet and IBS is an established diagnosis for cats. The symptoms are similar. One of the listed causes is, “separation anxiety.” This is probably what is happening with our cat. At least she isn’t an angry cat that is acting out.

There is a high association between childhood trauma and many adult illnesses. This also includes a shortened life span. IBS is one of the problems that is connected with Adverse Childhood experiences (ACE). Reactions to the environment are programmed in by your parents and are the basis for future learning. Early dysfunctional parental patterning will worsen with time. It isn’t possible to see your own dysfunctional reactions because it is your own personal norm. As I was developing many physical and mental symptoms, I thought I was fine. I fancied myself as being somewhat “enlightened” since I had engaged in so much self-exploration. Little did I know I was reinforcing the patterns that were the source of my problems. I had no clue that I was angry. I just had “high standards” of myself and expected others to have the same. So I was constantly judgmental of me and others. I was just “frustrated”.

Sophia was a rescue cat and abandoned by the side of the road before she was weaned. My wife was at a farmer’s market and called me about bringing her home. As she was holding her, Sophia instantly attached herself to her neck and began nursing. Of course, some serious bonding was happening at that moment. We always thought she would stop doing it, but nine years later she hops on the bed every morning and nurses more fervently than ever. If my wife doesn’t let her do her thing, there’s a noticeable difference in her behavior throughout the day.  Early patterns are permanent. 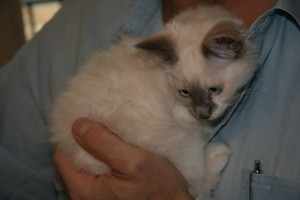 The day she came home

The DOC process represents a set of concepts that allows you to become aware of when you are triggered and teaches you strategies to alter your body’s chemistry to a more favorable state. Not only will IBS symptoms resolve but so will the multiple other ones. I was experiencing 17 of them simultaneously while I was in the depths of my own Abyss. It is still surprising to see most of these gone. I had migraines, tinnitus, and burning feet for over 25 years. Who would have thought they’d disappear?