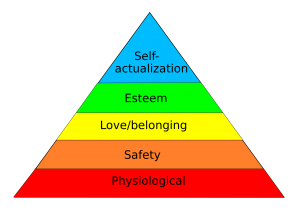 Abraham Maslow (1908-1970) was a brilliant professor of psychology. He founded a branch of psychology known as “Humanistic Psychology,” which focuses more on psychological virtues or excellences rather than on psychological disorders. Maslow is best known for his conceptualization of “man’s hierarchy of needs.” This hierarchy is usually represented as a pyramid, which is depicted above. Maslow thought that meeting one’s basic needs in the lower part of the hierarchy was necessary before progressing to the needs at the top. He also recognized that getting to the very top of the pyramid, what he called self-actualizing–flourishing as a human being, was not commonly attained.

The most basic needs are physiological:

According to Maslow, it is impossible to progress up the pyramid if you cannot obtain air, food, water, sleep, and sex.

A thought struck me as I looked at his hierarchy: where is the need to be free from pain? I believe this need belongs on the bottom row. Any time a basic human need is not met, anxiety quickly results. If the basic need remains unmet, then the anxiety will progress to anger, disrupting your quality of life and compromising your ability to function. When you are in pain, your body will flood you with anxiety in an attempt to protect itself from harm. (I talk more about the relationship between pain and anxiety in “Your Hand Stuck Over the Stove.”)

Will you have the wherewithal to progress up the hierarchy of needs when you are consumed by pain? You won’t. I believe it is impossible to flourish as a human being without first absolving yourself of your pain. Maslow simply missed including this basic need in his paradigm.