I was relaxing this weekend and cleaning up stacks of papers that have been piling up over the last six months.  I ran across this letter a patient had shared with me from her prior surgeon.

She had undergone a major low back surgery and came to me with unrelenting pain in her left leg. As I re-worked her up, I realized that there was still a lot of nerve compression left from the prior surgery. Fortunately, after re-doing her surgery, her pain disappeared, but she was not moving forward like I had anticipated. She was extraordinarily pleasant and had a “life of the party” personality. I could not figure out what might be holding her back. Our conversations began to center around anger and she really felt that she was not angry. However, every time I mentioned her prior surgeon’s name she would become quite agitated.  One day she brought in the following letter from the surgeon.

I must advise you that you are beginning to wear your welcome thin.

I am fully aware of the stress that having major surgery will put one under. I also realize that individuals that do not feel well are not always at their best in terms of interpersonal relationships. However, you have been substantially difficult to care for thus far since your surgery last week, have stayed in the hospital substantially longer than other patients your age with similar problems, and have complained very steadily about the inadequacy of pain medication despite doses that are far in excess of what I usually administer.

I attempted to explain all of this in a very lengthy conversation. I advised you that I know that your pain tolerance was low, and that you would therefore not likely be able to gain the degree of relief that one would typically associate with narcotic medication. Having said that, I increased your doses yet again.

It would seem self-evident that a person who has had such difficulty with pain management would therefore make certain that the first thing accomplished after discharge was obtaining the prescriptions that I wrote for you. Yet tonight at almost 9:00 pm, I received a call from the answering service stating that you had a problem filling your medications.

Any additional nonsensical or adolescent behavior will be greeted with discharge from my care. Make no mistake about it, I have fired patients before, and you are not immune. By copy of this letter, I am notifying worker’s comp that thus far I have had difficulty getting you to follow simple instructions. Please make a better effort to be as good a patient to me as I am trying to be physician to you.

I get it. In addition to being frustrated about her employer being negligent in causing her injury, she then had a surgery that did not go as well as planned. Then her surgeon scolded her when she was seeking relief from the pain that should have been relieved with the surgery.

I am sympathetic to her plight. But life rarely is easy. Surgeries fail. You are not always treated the way you deserve. No matter how legitimate your anger, it will still take you down into the depths of the abyss. You still have to let it go – completely.

In Forgive for Good, Dr.  Fred Luskin out of Stanford, reported on his work with the parents of children who had been brutally murdered.  Until those parents could forgive the murderer, their quality of life was done. 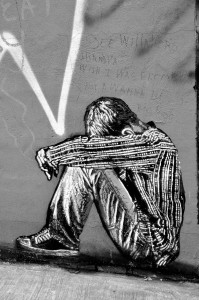 I had another three visits with her.  Each conversation was remarkably pleasant.  However, she never acknowledged that she might be angry.  She was just “right.”  I don’t know the final outcome of her situation, as she never followed up with me.