The areas of the nervous system are named by location but are just different areas of one system. It consists of: 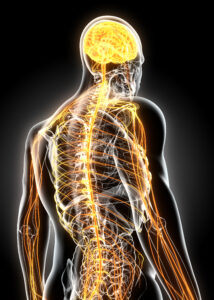 Every aspect of it is equally as critical for survival. The autonomic nervous system (ANS) regulates all the internal organs and chemical balance of your body. It is named as such because all of its functions are automatic. A few of its actions include regulation of:

There are two parts to the ANS that are constantly active and counterbalancing each other – the sympathetic (SNS) and parasympathetic (PNS) systems. The SNS is often referred to as the physiological gas pedal. Its role is to activate your body’s defenses to fight off threats of any kind. The threats can be physical, mental, or emotional. For this discussion, we’ll categorize societal threats under physical threats. The threats may be real or perceived, but your SNS will respond in a similar manner.

This activated physiological state is called, “Flight or fight”. When your body is exposed to prolonged elevations of inflammation, metabolism, and stress hormones, different physical and mental symptoms will be manifested. When it is sustained, people develop serious illnesses and diseases, including chronic pain. The late phases of SNS activation are called, “freeze or faint” where there is systemic collapse of bodily functions. It is the body’s final survival attempt.

The most effective way of combatting and preventing chronic disease is to stimulate the PNS, which has the opposite effects of being anti-inflammatory, lowering metabolism, stimulating regenerative hormones, and calming the nervous system. The PNS is the physiological brake pedal. Remember that both the SNS and PNS are both almost equally active most of the time to maintain an incredibly delicate balance (homeostasis).

Your body has to be in a regenerative state of safety in order to heal and replenish itself. It is the common denominator of the various effective healing approaches and there are many ways to achieve this state. The foundation of the calming PNS effects is the vagus nerve. It is the 10th cranial nerve that originates in the midbrain, below your main body of the brain. It is connected to every internal organ in your body, including the immune system. Recruiting and reinforcing the vagus nerve is the most powerful way of inducing a relaxation response to counteract threat physiology.

Research suggests we can induce this relaxation response of the PNS through various breathing exercises. Some of them include:

Understanding that using these tools directly effects your flight or fight response, helps you to engage and use them daily. Again, this is working with your physiology and the effect on your psychological state is secondary. Your physiology is what determines your mental state. It is desirable to stimulate the PNS as much as possible. 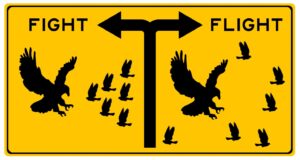 One of the basic premises of successfully solving chronic pain is taking control of your own care. One step deeper is directly stimulating the calming effects of the parasympathetic nervous system (PNS). There are multiple ways of making this happen, with breath work being one of the most accessible and it works quickly. However, you are addressing just one aspect of the body’s response to stress, which is the physiology (output). It is temporary and just part of the solution.

Addressing the input and the state of your nervous system are bigger picture strategies, but it is critical to have easy and direct access to your PNS.