I first met Mark at our 2017 three-day “Rewiring Your Brain” workshop at the Omega Institute in Rhinebeck, NY. He had flown in from the Netherlands. His main problem was chronic low back pain that he had experienced for over 15 years that The workshop was based on Awareness, Hope, Forgiveness, and Play. We have witnessed many, if not most of the participants experience significant shifts in mood and pain within a few days. It seems that the people heal each other while sharing enjoyable experiences in a safe environment. It has been described as an “adult summer camp.”

Mark was in his early 40’s, successful, married with two young girls, and intense. He is a great guy and had a good time with the group. He experienced a nice improvement in his pain. But I tell every person, “Your pain will recur when you go back to your environment with its triggers–especially the family ones, which are the strongest. That is what happened, but he was able to use his tools and do pretty well. He wasn’t satisfied and returned for two more workshops in 2018 and 2019. Each time he had been doing better but wanted more and had hit a wall. Unfortunately, or fortunately, I am a surgeon and not a counselor. I had a blunt (very blunt) conversation to let go, quit trying to fix his pain, stop seeking more wisdom, and just get on with his life. I told him to quit reading books, including mine, and focus on nurturing himself and his family; that is best done through play. He wasn’t that happy with me because he thought I was going to give him more strategies (I had run out….). I did not hear from him for over six months and was a little worried, so I wrote him. Here is part of his email.

In general, I have lost a bit of an interest in all the pain-related stuff. I guess I have read too many books in the past and now everything feels a bit old and repetitive. But most importantly, I came to the realization that I will never fully figure it out. So, as a result I haven’t read or listened to anything pain-related since last summer and I have shifted my attention to other things (He actually listened to me).

Both of my girls (10 and 12) play field hockey. And my youngest one made the first team this year, which is kind of a big deal here where I live. Next to Soccer it’s our number one national sport.

Anyway, in order to support my daughter in her endeavor, I changed from being just a spectator to being her coach and practice partner. In other words, I started playing myself and learning a new and technically difficult sport. So, I have been playing 3-4 times a week since July with my daughter. We go out and play ball for about 1-1.5 hours. On the days that we don’t go out we play and practice our skills in the kitchen. There is always a stick and a ball nearby. Long story short, I live and breathe hockey and I absolutely love it.

Neuroplasticity in action and from action

Instead of doing what I normally did, which has been the same for the past 10-15 years or so, I started changing myself with new goals and ambitions, new thoughts and emotions, and lots of physical exercise. Instead of being occupied with the familiar and usual things, everything changed. My interests went from intellectual (pain related) to something completely new. One day I realized that without intention I was actually creating a new identity by changing my brain and thus reprogramming my nervous system.

Even though it’s said that hockey is really strenuous on your physique and in particular your lower back, I haven’t had the least bit of pain. On the contrary, it rather goes away. Even my anxiety at certain times of day, has mostly vanished. I feel like by accident I have found a natural way to un-condition myself from certain pain and anxieties that were built into my daily routine and how I react towards life in general. It’s been wonderful to witness… afterwards. I say afterwards because I wasn’t preoccupied with my (old) condition. I didn’t care about the old me because I was too busy becoming someone else. Do you know what I mean?

I do still have pain, sometimes even a lot of pain.. but that is from all the physical exercise. At 46 years of age I may be pushing it a little.. and I am finding out that I am not getting any younger ! But it’s all good. Mark 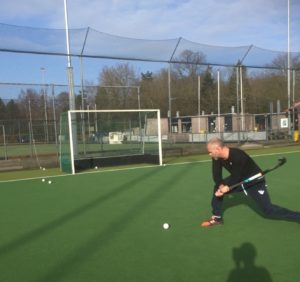 We have now reconnected and are in touch regularly. He has even come a long way since this email at the beginning of the year. He told my wife, who provides the rhythm and movement part of the workshop that he had thought the play was a waste time. He told her that he now felt it was the most important part.

Here are some observations he recently shared with me that I feel are the essence of healing. I have a question and answer session every Tuesday and Thursday at noon Pacific Time. This email was in response to one of the Zoom calls.

When I was listening to Vincent (another Omega graduate) and later also Babs (my tap dancing wife), I couldn’t help but wonder how useful these explanations are to the other listeners. Without a proper context, I am just a guy that started playing with a hockey ball, Vincent (an accomplished artist) plays with masks, and Babs creates art. So, how does that relate to someone else’s personal situation. What are they supposed to do with this type of information? People, including myself in the past want answers to questions so they can solve their own issues.

I kept thinking how I never really understood that point of letting to and enjoying life. On an intellectual level perhaps but I never was able to practice it in real life. For me it was by sheer luck that I finally made a real shift. I was literally tired of solving a problem that couldn’t be solved by my intellect. I was so tired of it that I stopped listening to all my favorite audiobooks every night including yourself (I didn’t take it personally). And I decided to just have fun and do something else with my life. I happened to choose a brilliant combination of physical activity, play and family.

As I told you in one of my previous emails, I literally changed my identity. I believe for me awareness and a change of my identity was key for my breakthrough.

It wasn’t until afterwards that I realized how my pain and anxiety were closely tied to my identity that I build up over many years. My neurology created the same predictable body chemistry every day. How I dealt with people and situations in life, my thinking patterns, emotions never really changed as they were part of my identity. And as pain is a reflection of your ‘body budget’, the way I unconsciously regulate my ‘chemistry’ was always pretty much the same. To me, this was the metaphorical mountain I tried to conquer with a pick axe.

Even though I know that healing occurs differently with different people, I wonder how most of us can achieve a lasting change  unless we change some of our habits and the way we live, without giving up some of who we are. Who we are now, is the identity that experiences anxiety and chronic pain.

Only by letting go of that part of you and replacing it with someone or something new that is fun, playful and loving you can let go of your pain. Simply because part of you that identified with pain no longer is in control. However, that is the difficult part, it starts with awareness and then following through with starting a ‘new life’.

Mark persisted and made it. Some people have almost immediate responses and he had a great start. But it is hard to comprehend what is possible. By continuing to move forwards, he is now living it. Nice work!! 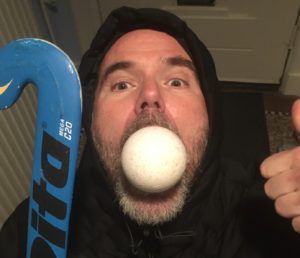