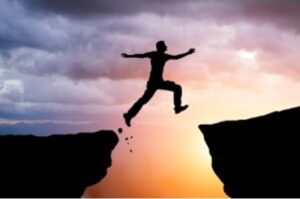 Positive thinking is a global form of thought suppression. If a situation is bad, it is of no benefit to pretend otherwise. A research study demonstrated that thought suppression damages the hippocampus of your brain, which processes short and long-term memory.1 It is also been well-documented that when you try not to think of something, not only will you think about it more, there is a trampoline effect and you will think about it a lot more.2 None of us like negative thoughts or emotions, so we naturally try to suppress them. Some of us may even shut the door so hard that we disassociate. The solution lies in learning to separate from them, and then choose to move forward into a positive vision. You do have an option of responding to it in a positive way.

That is exactly what I did my freshman year in high school. In the eighth grade, I was indescribably insecure, to the point that I was stuttering and could hardly talk without choreographing each sentence before I tried to speak. I decided I was done with my chaotic existence and created a new life for myself.

“When the going gets tough, the tough get going.”

“What are you complaining about?”

These kinds of thoughts were what ran through my head from that day on. I worked hard to create my identity and, of course, had no idea that I was disconnecting from who I truly was. Instead of leaving the past behind, I was battling with it.

I became the ultimate positive thinker and felt that that there was nothing that I couldn’t accomplish. My “identity” was being cool under pressure. I was also nicknamed, “The Brick,” by a few people, which I took as somewhat of a perverse compliment. It wasn’t.

This approach worked for about 20 years and seemingly brought me a lot of “success.” Until one day – suppressing my thoughts no longer helped. Within five minutes, I went from not really knowing what anxiety was to having a panic attack. Then I experienced multiple other physical and mental symptoms. There is a huge mental and/or physical price to pay for this kind of thinking. It will inevitably make a person ill well before their time.

One of the traits that emerged from that time period of middle school through college was being hypervigilant. I was analyzing every move I made compared to everyone else. I read every self-help book and was committed to improving myself in every way possible. I was open to therapy, tried meditation, studied Buddhism, and attended workshops.

It is fine and necessary to be aware of your past and understand how it might be playing out in the present, but then it is critical to move on. Many of us are intent on improving ourselves only by analyzing our flaws. We also try to “find ourselves” by deeply discussing the past and then try to fix our faults. This approach can’t work in that you are focused on the problem and not the solutions. It is like placing your hand into a hornet’s nest. Your brain will follow familiar patterns, and the more you look backwards into your pain, the more you will continue to sink into those negative circuits. 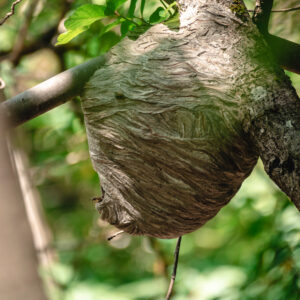 Positive substitution/ vision is basic to neuroplastic reprogramming. It has been challenging for me to sort this out from positive thinking. You have to first understand where you are before you can move forward but doing battle with your past does not accomplish this. If you are in a surviving and fixing mode, you stagnate. However, creating a vision of where you want to go and taking steps to get there is a much different approach

I was able to pull out of my 15-year tailspin into chronic pain by using the basic writing and relaxing tools, getting better sleep, and dealing with deep anger issues. But I have struggled with the concept of positive substitution. Additionally, I lived in a medical culture that is demanding and tends to focus on what we have done wrong. I have been fortunate to encounter some wonderful mentors who have role-modeled a better way to think, and I am continuing to learn.

I was introduced to another level of positive substitution during a remarkable tennis lesson that I took from Mark Johns, owner of The Tennis King, in Great Neck, NY. Normally I would be focusing on my technique, analyzing every shot, and trying to make the next one better. Instead of working on the position of my follow through, body position, footwork, etc., he just had me focus on inhaling during his backswing and exhaling all the way through my swing. I struggled and I was not thrilled with him for the first half of the lesson.

During the second half of our lesson, it hit me how brilliant his approach was. My whole nervous system was focused on his every move, including the position of the racket. Instead of thinking of correcting the flaws on my last shot, I could anticipate the next shot; my body was unconsciously adjusting and the chances of executing the next shot were much higher. This is not to say that focusing on solely on technique is incorrect, but it allowed me to trust what I had and maximize it. The results were remarkable and without a single additional technical thought. I learned to accept that no two tennis shots are the same. Are there any aspects of life that are identical?

One of my best friends and mentors, David Elaimy, has been instrumental in teaching me to create a vision of excellence instead of driving myself with self-criticism. The process involves assessing where you are, along with your resources, and then decide where you want to go and what are the steps to achieve that goal.

He is a remarkably enlightened person and has been coaching athletic performance principles for over 20 years. He coached my son, Nick, to 5th on the North American mogul ski circuit in 2007. Nick was poised to win the 2008 National Championship when he blew out his knee on a warm-up run. David was instrumental in coaching Nick’s best friend, Holt, to the US Moguls championship in 2007.

While watching him work with these two, I realized the implications for my practice and engaged him as my surgical performance coach. He had a dramatic effect on my performance both in and out of the operating room. My complications decreased as my enjoyment increased. He coached my spine fellows, who are residents taking extra training to better learn spine care. His input resulted in the young surgeons having fewer complications during the fellowship and into their practices.

David was also a volunteer assistant coach for the University of Washington women’s golf team. I have watched him coach the coaches, and also coach players. He had a similar impact on them as he had on me and my fellows. The team was in contention for the National Championship for a couple of years and in 2016, they won it. There were many factors, but here are some of the core strategies:

He had the whole team do expressive writing and immediately rip it up. It has been well-documented that simply writing down your thoughts, positive or negative, somehow breaks up the anxiety connected with thought suppression. Tearing it up allow you to write with freedom.

Then, he had them practicing active meditation while in competition. This exercise involves placing your attention on any sensation for a few seconds. In the midst of the cameras and crowds, they would listen to the sound of a bird singing. With active meditation you are shifting from disruptive thoughts more pleasant sensory input. We also used these strategies during surgery by focusing on light touch in challenging situations. 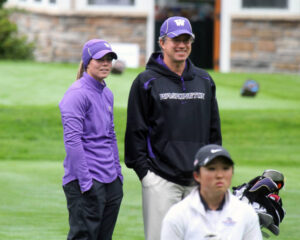 Visualizing success and vision of excellence

Visualization is also an important tool in stimulating your brain to change and perform. It was a key aspect of Holt winning his National moguls’ championship. He visualized every detail of his winning run while he was in the starting gate, and then connected to sounds and the feel of the snow. One of the U of W Huskies sunk a 60-yard clutch shot in the winning round. She had also used the practice of visualizing the ball going into the hole.

David’s vision of excellence also included that the team was going to have the best time possible, whether they won or lost. They all committed to being the happiest first or second place team in the field and they stuck to it. Winning it all was a bonus.

Visualizing success improves the chances of making it happen. And how to you define it. It is much more than just winning. One of my most important and successful mentors taught me that no matter what project he started, the first question he would ask himself was, “will it bring my joy?” A vision of excellence that includes “failing” allows you to perform with freedom. He also viewed “failures” as opportunities to learn and figure out a better way.

Recap – Put the hammer down

It doesn’t’ make sense to live your life while thinking about the past or trying to compensate for it. Although understanding when programmed reactions come into play is important, it doesn’t create a bright future.

I ran across this song, Better Not Look Down, by BB King that sums up this discussion, “Don’t look down or back. Just look up and put the hammer down.”

It is your life and you have a choice about how you want to live. What is your vision of excellence and where are you placing your attention?