A letter from a case manager

You may not receive these kinds of letters from nurse case managers very often.

I thought I would advise you of the above captioned patient that you performed a redo L5-S1 microdiscectomy about a year ago.  Ron got quite discouraged when he did not improve.  He was almost done with your book, Back in Control when he got off the couch, got motivated, moved forward, and we saw a dramatic change in his attitude. He worked through his pain, eventually stopped all medications, completed PT, and work conditioning programs. He was recently declared fixed and stable and was released to his job of injury as a sorter. (One of the hardest jobs around, believe me!)  He is back on the job and doing very well!!

Please thank your assistant for all of her help.

Thank you for all you have done for Ron.

Ron was only in his early twenties when he ruptured his lowest disc, L5-S1, while on the job a couple of years earlier. A prior surgical attempt to remove the disc had not given him lasting relief. When I first saw him, he was experiencing ongoing severe sciatica down the back of his leg. His MRI scan showed a large ruptured disc. It had probably re-ruptured relatively soon after his first surgery.

I am always clear about the goals of surgery and what I can and cannot accomplish with a given operation. He had a significant amount of lower back pain (LBP) in addition to his sciatica. There is not an operation that relieves LBP, and I explained to him that I would only address his leg pain. I also explained to him that once you have had ongoing pain for more than four to six months, the brain lays down pain pathways, which are permanent. (1) Although it was necessary to re-do his operation, my observation has been that the sciatica still will often persist. The pain is usually better, but often it is still severe enough to really destroy the quality of your life.  The back pain and residual sciatica are treated by the tools on this website. 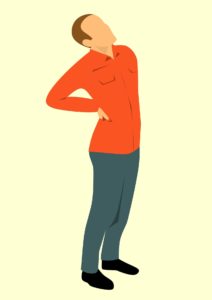 After my operation, which was a redo of removing the disc at L5-S1, Ron did not do that well. As expected, he had ongoing back and leg pain. I had explained the DOC Project to him, but he had not really engaged. Finally, about three months after the surgery, I was extremely clear with him about where he was headed. Living the rest of your life in chronic pain when you are in your early 20’s is not an inviting prospect.

I did not post this story right away. In the interim, I began to think about my historical view in dealing with patients on Worker’s Comp. I was taught and believed that it was my role as a physician to “set boundaries.”  It was in the patient’s best interests for me to be tough and just “shut the door.” Injured workers, I thought, are focused on gaming the system and remaining off of work. It is often repeated in seminars that injured workers have “secondary gain” issues, and that if the benefits were decreased or cut off that would be the best motivator to get people back on the job.

I realize that a only small percent of people are gaming the system. However, my strong observation is that given the opportunity, people want to thrive. Surviving on a fixed income when you are only in your 30’s or 40’s is not living a full life. Years ago I would have told him to “buck up and just get back to work. That would be the best thing for you to do to help your life and pain.” I would have just closed his case.

When you have been physically and emotionally beat up by the pain and the system, you have lost the ability and motivation to become productive. Once you have the tools to reconnect with who you really are and where you want to go, there is no stopping you.

It took about six weeks for Ron to fully engage, but he did it. This whole project is about showing you the tools to heal yourself. My role is to be a coach and cheerleader.  Watching patients like Ron start smiling again as they make strides in becoming pain free is one of the most rewarding aspects of my practice. I am grateful that I have been able to help show him the way.