I have felt that it is important to pick out heroes to emulate. One person that I have greatly admired is an orthopedic surgeon, Paul Brand. He is the co-author of his autobiography, Pain, the Gift that Nobody Wants. (1) I knew him personally and he was as gracious a person as you could imagine. At age 93, he flew across the country and lectured at for me at conference I hosted on only five hours of sleep.

His book caught my attention in the first chapter when he related the story of his missionary family moving to a remote area of India where no one had ventured because of a deadly type of malaria. Sure enough, his father died relatively soon from it, but his mother spent the rest of her life there serving the medical needs of these people living in incredibly remote area. He went on to become an orthopedic hand surgeon and spent the first years of his practice in India dealing with patients with leprosy. You may know that they routinely develop severe grotesque deformities of their arms and legs. He would perform corrective surgery and kept meticulous records of his approaches both for learning and teaching.

Since the beginning of time, lepers have been treated as outcasts with their limb and facial deformities being nothing short of hideous. After it was figured out that that the leprosy bacteria was the reason for these problems, they still were not treated that well, but at least it wasn’t some type of evil humor or demon possession. Doctors felt that the bacterium directly attacked the tissues and caused the disfigurement.

Dr. Brand figured out that the deformities were not directly caused from the leprosy bacteria, but because the bacteria destroyed sensory nerves and they had lost protective sensation. Your pain system sends signals to the brain, which interprets them to indicate danger any time the limits of a structure or tissue are being challenged that could result in damage. For example, a morsel of food would fall into the cooking fire and the person would reach right into the coals to lift it out. If there was an injury to an ankle, normally you would rest in order to allow it to heal. These people would just keep walking and eventually the joint would disintegrate. A common descriptive term is, “a bag of bones.” 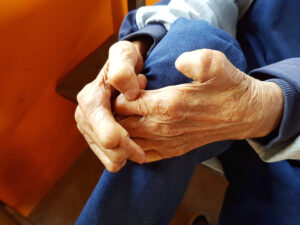 When he returned to the United States from India in the 60’s, he began to notice similarities between his patients with diabetic foot and leg breakdown and his observations of leprosy. There were poorly healing skin ulcerations, infections that would not heal easily, and joints were severely breaking down. Doctors felt that the elevated blood sugars were the cause of the problem. He quickly noted that it was the same problem that existed in lepers; the sensory nerves were being damaged and that they losing protective sensation. It was his pioneering work that led to more aggressive control of blood sugars, protective footwear, healing casts, and patient education to learn ways to protect themselves. He made a huge difference in many people’s lives.

He also described the problems that are created when people are born without a functioning pain system. It is a rare condition called, “congenital indifference to pain.” They have no way of programming their brain as to what might be dangerous or safe. They routinely exceed the limits of their tissues. They don’t even know how to avoid a hot stove. Their lifespan is only about 10-15 years and they die from repeated infections.

Dr. Brand, as a part of his work and research, was given a large government grant to develop a device that would warn people without protective sensation of danger. He devised a tight fitting body sensor suit that would send unpleasant warning signals to the brain when there was potential tissue damage. For example, if a person was using a wrench to tighten a bolt and was pulling too hard, they would receive an unpleasant electrical jolt. The problem was that the person didn’t want to be bothered and would just remove the glove and proceed to damage his or her joints.

The state of your central nervous system

After multiple attempts, everyone gave up. There has never been a solution for someone not having a protective pain system. The problem is that it is incredibly complex system that exists in a delicate balance. Additionally, the final perception of pain is determined by the state of your central nervous system as well as your prior experiences. For example, one night of poor sleep will significantly increase your pain the next day. (2) Consistent lack of sleep actually causes chronic low back pain. (3) Arguing with your spouse instantly increases pain. (4) Running into the bully at school may cause your stomach to churn. This list is infinite. Why would this be the case? Because pain is only pain because your brain says it is so. Your brain is analyzing about 20 million bits of information per second and is programmed to keep you safe and alive. The species of creatures who did not pay attention to environment cues did not survive. Pain is a major part of all of this and is a gift that allows you to safely navigate this planet.

The curse of chronic pain

Chronic pain is not a gift. For many reasons this intricate and balanced pain system is broken. It continues to fire away even when there is no danger. So, now you have a scenario where you are experiencing a sensation that is intended to be so unpleasant that it compels you to take protective action, but you cannot turn it off. It is like a car alarm that won’t turn off except it is incredibly more disruptive. It may be one of the worst experiences of the human existence.  Research has shown that living in chronic pain has a similar impact on a person’s life as experiencing terminal cancer. (5) The problem is that while suffering from chronic pain, you are not being told the nature of the problem, and where is the endpoint? You could argue that it is worse than having terminal cancer.

Fortunately, chronic pain is solvable by first understanding the nature of the problem and then learning approaches to bring the system back into balance. The DOC Journey represents the sequence of many patients who have broken out of the grip of pain. You first have to understand the nature of a problem before you can solve it.

The Journey also begins by embracing your disbelief. You have already tried everything that has been suggested, why would you try this process? Although a positive vision is necessary to move forward, this Journey is not about positive thinking. It is about becoming connected and engaged to what is right in front of you regardless of how pleasant or unpleasant it may be. Then you can move on. 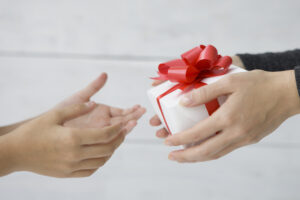 Don’t let the gift of pain that has spun out of control take way from your gift of life. Treat yourself this Holiday by taking  your life back.