Being a victim is universal because we are victims. Life is challenging for all living creatures, including humans. We are competing for resources and a lot of behaviours are less than pleasant. Humans have an additional problem in that we have consciousness, which impacts us as much as physical threats, but we can’t escape it. All of us are “trapped” unless we choose not to be.

There is a a “genealogy” of anger that is important to recognise.

Anger is the set of sensations generated by an intense fight or flight response and it is damaging to your body when it is sustained. There is a set of tools that I call, “anger processing” that calm down this response and it is a set of skills you must use many times a day. Life keeps coming at us. Unfortunately, the more legitimate your anger, the more difficult it is to process – but it still damages your body. Being trapped in mental or physical pain is one of those situations.

Carol is a woman who contacted me about ten years ago. She had read Back in Control and began to use the strategies outlined on my website to calm her nervous system. She had been severely disabled with pain throughout her body. Within a few months she began to improve and was markedly better by the time she connected with me.

I have since learned that all chronic disease, mental and physical, is caused by chronic stress, which means your body’s chemistry is in sustained activated threat physiology. She had already developed a significant set of medical problems by the time I had met her with many physical setbacks. She kept moving forward and her efforts were inspiring.

Then she had to be put into a nursing home on the other side of the country, and she was truly miserable. I did not have any suggestions and was also a bit discouraged by her situation. Then a few months ago, I received this letter. 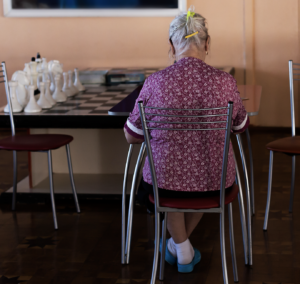 Just a note to let you know your DOC Journey has pulled me through yet another trip back to The Abyss. Since moving here last June, I have felt I have been in a “third world country,” also known as an Assisted Living Facility. It’s bad enough being 83 and sick, but it’s even worse when the facility you live in is way below par in every way, Staff, food, medical needs, activities, cleanliness, and caring. Add that to that the frustration over my loss of hearing. Closed Captions are now a part of my TV world and I find myself wanting them everywhere. I cannot afford the doctor who recommended hearing aids right now because I am working on yet another expensive “fix it” project, my teeth. What else can go wrong? The depression/anxiety and pain were also taking over my life again.

However, rather than just sit here and play the victim, I thought; what can I do to make this better? I remembered a conversation you and I had after I read his book, Back in Control and about helping others. That is what I felt he did for me. He took his knowledge and experience and has helped me and others understand how we can apply it to our own situation with his book, the weekly newsletters, various posts, and podcasts, the Q&A sessions and other educational material. He shared what he knew and paid it forward! How could I make this work in my own situation?

I remembered the experience I had of working with my mother back in 1977. She had Alzheimer’s. I knew nothing about that, Medicare, Medicaid, and elderly living. I moved in with her, turned her 3rd bedroom into an office and worked on getting her proper care and eventually, into a lovely Skilled Nursing Facility. It was an exasperating experience as I was suffering from a recent divorce, depression/anxiety, chronic pain, and Fibromyalgia. But, as I look back on it now, I realize it was very also very educational. Several years later, when I was the Executive Secretary for both the Director and the Administrator of a 27-story health care facility in San Francisco, it occurred to me that I could use that expertise and knowledge as well, and act as an advocate for residents who could not be an advocate for themselves.

Subsequently, living here for a while, I realized that most of the residents have some level of dementia, and no one is paying much attention to them. Unfortunately, their families have just dumped them off for someone else to look after. I knew how good it made me feel when I talked with you because you validated me as a real person, not just a number. For such a long time I felt that no one understood what I was talking about. His understanding and willingness to share gave me so much hope and began to restore me as a human being. I learned that this is what people want most, to be recognized, cared for, and loved.

As bad as this place is (and it’s bad), I felt that perhaps God had placed me here for a reason. Before moving here, I lived in a fabulous Assisted Living facility in Washington, so it gave me something to compare this to. Maybe I could make a difference. I found out where to complain, the State Health Care Facility Complaint Board, and contacted them. I also contacted the Ombudsman for this district. I wrote to and talked with both parties, plus Administration heads and some of the board members of the place where I live and pointed out nearly 20 complaints. The more I have worked with these residents and staff, instead of thinking about my problems, the better I’ve felt. And, I am pleased to say that because I was willing to stand up and pay it forward, the facility is making some real changes that have made a major difference in most of the resident’s wellbeing. 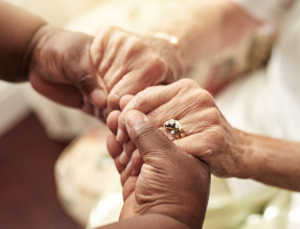 People often use the term, “stress management” to deal with adversity. What is overlooked in this phrase is that at the situations that are the most stressful are the ones you can’t control. So, the approach needs to be flipped. You must learn to calm yourself first, which requires learning the skills and practice (there are plenty of opportunities). Positive thinking doesn’t work. You have to address each scenario head on. If you can change it, do it. If you can’t, then use your tools.

Paradoxically, as you are not burning up energy on situations you have no control over, you’ll have more to actually solve more of your problems. If you are dependent on your circumstances for your peace of mind, you are at the mercy of them.

She was truly trapped, and actually still is. Many, if not most of us are in similar situations, whether it is finances, difficult work environment, lack of opportunity, racism, or family dynamics. She chose to relate to her circumstances differently, which allowed her body to reconnect to its capacity to heal. You will be surprised to see how many more of your problems are solvable when you can calm down first. She continues to be an inspiration for me.