I began my orthopedic surgery residency in 1981. I had an unusual path into this specialty in that I had completed two years of internal medicine residency in Spokane, WA prior to moving to Hawaii. Most orthopedic residents have had one or two years of general surgical training prior to specialty training. It’s helpful to have been exposed to basic surgical techniques before moving forward. I hadn’t even scrubbed in surgery more than a couple of times. The situation was intense. Fortunately my fellow resident was extremely talented and he was a tremendous help in getting me through that first year.

In retrospect, I was not mentally ready for the switch from medicine to surgery. I could barely tie a knot, much less make an incision. My stress levels went through the roof.

I began to notice a slight burning sensation on the balls of my feet as I went for a jog. I didn’t think much about it and thought that it was a combination of the warm pavement combined with the jarring associated with running. It became progressively more constant and clearly was not due to the heat of the pavement. 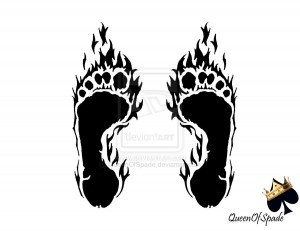 I moved to Sun Valley in 1999. It was a difficult time for me personally. The persistent warmth in my feet was aggravating, but still tolerable. One night that abruptly changed. I had experienced a particularly difficult day and became extremely upset. Within 12 hours, the burning dramatically increased to a level where they felt like they were in a toaster oven. It didn’t matter what I did, the pain wouldn’t abate. Seeing patients usually distracted me from the pain. Now, it didn’t help. The only time I didn’t experience the severe pain was during surgery and it persisted for six months.

It strikes me as I am writing this how frustrating it is to describe your pain to other people. Words really cannot convey the severity of this pain and the absolute frustration I felt being trapped by it. I can sense this same frustration in almost every patient who is trying to convey his or her suffering to me. Hand over the stove

I knew how angry I was at life. I intellectually knew that my anger was a problem, but I didn’t connect it to the pain, nor could I let it go. Every possible diagnostic was normal. I continued to sink into what I now term the “Abyss.” I define the abyss as “anxiety multiplied by anger multiplied by time”. I could not see a solution or the possibility of one. I completely lost hope. I don’t think words can convey the depth of suffering when you are so trapped.

It was on Mother’s Day 2002 that I realized what a victim role I had placed myself into. Prior to that moment I honestly didn’t understand what being a victim entailed. I was frequently frustrated and was quick to blame anyone close by for my problems. As I felt so “right” in having these emotions, I thought it was just a normal way to be. It is such a powerful role that I realized that I would never willingly want to surrender it. I had to simply choose whether I was going to remain in that role or not. I chose to give it up.

Within two weeks the burning began to abate and within three months it returned to the baseline nuisance pain I had experienced for over 20 years. It took me a while before I linked the improvement to my letting go of the victim role. Burning sensations throughout your body are one of the symptoms of the Neurophysiological Disorder (NPD).

I still experience intermittent flare-ups that clearly are related to extreme stress and lack of restful  sleep. I also quit using the tools that had pulled me out of pain, such as the expressive writing, relaxation, getting consistent sleep and allowing myself to remain angry. Other symptoms that reappear are migratory skin rashes, knee pain, tinnitus, insomnia, and scalp itching. These episodes resolve quickly once I re-engage with some basic strategies and realizing how deeply I had fallen back into a victim role. I’m always a bit perplexed why I keep jumping back into the pain mode.

I am well-aware of the fact that many patients suffer from documented peripheral neuropathy caused by diabetes, thyroid imbalance, vitamin deficiencies and those of unknown cause. This situation is created by damage to the substance of the nerves. It’s unclear how much of the suffering could be alleviated by the DOC (Direct your Own Care) process. My situation did not show any abnormalities on EMG testing.

The burning can occur in any part of of the body. One of the more common areas is around the mouth. Decades ago I had a friend with this problem, well before I had a clue about the neurological nature of chronic pain. I don’t know if she ever found relief.

The link between anger and the pain circuitry is absolute. Pain is a warning signal that creates anxiety and often anger to cause you to take action to protect yourself. Then when other circumstances agitate you there is a reverse connection to the pain circuits. It’s a miserable endless loop. That’s why it’s essentially impossible to have pain relief unless you can let go of your anger, including your deepest anger. Since anger is also permanently embedded in your brain, forgiveness is an ongoing daily process. It’s both the most rewarding and challenging part of healing.