When I discuss the idea that you can reprogram or shift your brain circuits around away from pain, there is always a certain sense of disbelief. However, this story is a typical one with the only aspect that is a bit unusual was the speed at which the healing occurred. Most people feel a some shift of mood and/ or pain within a couple of weeks, but usually the deep changes occur after three to six months. The key to reprogramming your nervous system is repetition similar to any learned skill. It is why I encourage people to never give up and to add on other resources if needed. I have witnessed many patients heal after several years of being persistent in learning and implementing the tools to calm and reroute the mental and physical pain circuits. 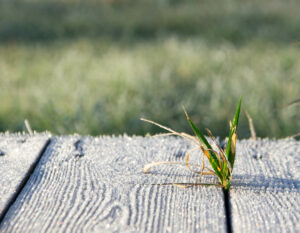 A story of healing

This is a letter that was submitted to the “Stories of Hope” section of my website.

I had back pain which became sciatica- it got worse and worse and I could only walk 50 yards. I read Isobel Whitcomb’s piece in Slate, where she discussed doing a Dr Hanscom workshop- I thought ok, let’s give it a try and within about 5 minutes my pain had gone from a 7 or 8 to a 2 or 3. 4 months later, I’ve got no pain at all- I’m running 2 or 3 times a week. My boss thinks I should advertise myself as a healer and throw chicken bones at people’s pain before giving them a “special pen” to write down all the pain. I am incredibly grateful to Dr Hanscom- he has changed my life.

Breaking down the healing journey

Expressive writing is the foundational tool of healing all chronic pain – mental or physical. It is rarely the definitive solution, although the shifts can happen quickly and be profound. The originator of the approach is Dr. James Pennebaker, who is an academic social psychologist in Austin, TX. He published the first paper in 1986 and over 2000 papers since then have documented its effectiveness.

The response from this person’s boss response is typical. It seems unlikely that such a simple approach can have such profound effects. But the data is deep and the benefits are consistent. Expressive writing was what began my journey out of pain after suffering from 17 different mental and physical symptoms for over 15 years. I discovered it accidentally and I did not understand what had happened until many years later. All my symptoms are gone and have not returned for almost 20 years. I layered on many other tools and eventually a healing sequence has evolved that has helped many people. However, expressive writing is always the one necessary starting point.

Interestingly for me, is that if I slack off on my expressive writing for two or three weeks, some of my symptoms will return. The most common one is burning in my feet, ringing in my ears, and skin rashes will come and go. Even 30 seconds of writing makes a significant difference. I now view the exercise as part of my regular mental hygiene.

Dr. Pennebaker has summarised the research in his book, Opening Up by Writing It Down, 3rd edition. Just a few of the effects include: 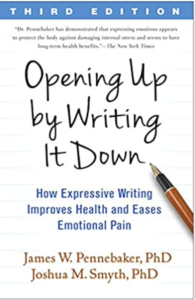 Why does this approach work?

We asked this question to Dr. Pennebaker and he is quite open in that none of us really know. His feeling is that it is a process that allows people to give substance to “secrets” that every human being has in some form. Just by the nature of consciousness we all have thoughts we are not particularly happy about or even ashamed of. Also, most of us have taken actions or been in situations we regret. Of course, we don’t want to share them with anyone, but we don’t have to. Just putting them down on paper gives them substance and separation. He pointed out to our study group that keeping secrets requires a lot of mental energy. Since 20-25% of our entire body’s fuel consumption goes towards running our brains, you’ll eventually wear out. And with time these secret circuits become much stronger. You cannot do battle with them. You can only separate from them and is the reason that expressive writing is a necessary step to begin the healing journey.

The core of the healing journey

There are two separate but linked skill sets to the healing journey. Both are equally as important. One is learning to process your survival circuits that humans call anxiety and anger. The other is moving your conscious brain into the life you want. But you can’t move forward while being enmeshed with your past. The expressive writing is the beginning exercise to break you loose. I have not seen anyone really heal without using a version of this tool. The main “risk” is that your life will change, but you get to choose the direction.