This is a story of a middle-aged gentleman who became pain free using DOC Process principles. Although, he saw me primarily for back pain, it turned out that lack of sleep and anxiety were the more pressing issues. He had already seen 16 doctors in a span of eighteen months before engaging in these concepts.

I met Dr. Hanscom under the most stressful circumstances imaginable.

When I moved back to the Northwest a little over a year ago, I experienced crippling anxiety, panic and agoraphobia – combined with excruciating lower cervical and upper thoracic pain radiating down not one, but both arms. I was in and out of the ER four times in one month, and over a period of several months, with new and emerging physical symptoms, I had seen over sixteen doctors of different specialties and had nearly every study and workup imaginable, running up some fifty-thousand dollars in medical expenses in the process. I simply did not know what was wrong with me and was completely frustrated with the medical care system to a great degree.

When my back pain became the focus, I came to the local spine center and presented to Dr. Hanscom my symptoms. After filling out an extensive questionnaire, which covered not just physical lifestyle, but emotional and behavioral issues as well, I sat in the exam room waiting. He came into the room after having viewed my MRI and offered not surgery, but something different, as an option. He told me to read a book Feeling Good, use the tools in it and begin to look at how my lifestyle and the way I was thinking were affecting my physical symptoms. In fact, he said, if I quote correctly, “I believe that when you do the exercises in this book and get a handle on your anxiety and depression, these symptoms will clear up.” He also stressed the importance of good quality, full stage sleep, which I was also being deprived of, as a crucial aid to the healing process. 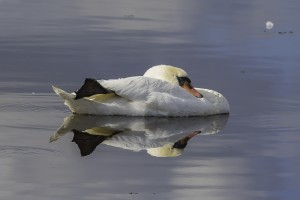 After this experience, while driving home I remember telling a friend down in LA on the phone, “Gee I went to see a doctor and I ended up finding a healer.” In light of everything, it just made sense. In short, I was ready to move on to the advanced user features of my own software and hardware for that matter. I purchased the book, read it and did the exercises, used the tools contained therein, followed up with Dr. Hanscom and after a few months, I began to notice a difference.

Then on a recent trip to Los Angeles for work this year, I noticed I had no back pain at all. Diligence is key and maintenance is the watchword, but I remain asymptomatic to this moment and when I do feel the twinges, the spaciness, or any other telltale symptoms, my first impulse now is to confront the thought behind the physical and emotional feeling. And more often than not, I return to a normal, happy and focused state of mind – only this time with a much easier disposition.

I met Charley in 2006. I had just re-commited to the DOC project. I realized that my patients either with or without surgery were not doing nearly as well as I had experienced in Sun Valley where the project was born. He was experiencing a lot of neck pain, but was also not sleeping. It was also clear that he was quite anxious and becoming increasinly discouraged by not finding a way out of the Abyss. He clearly was motivated to get better, as he had seen 16 physicians within an 18-month span.

At that time I did not have much clarity about the links between anxiety, anger, and pain. I happened to have a slow clinic day and was able to talk to him for a while. We hit it off and had a great conversation. We began by working on his sleep and I shared the book, Feeling Good with him. I asked him to begin the writing that David Burns, the author, had suggested.

The first six months were not that easy for him and we had frequent phone calls. He all of a sudden, “woke up” and went after everything with a vengeance. There was no book or website at the time presenting the Back in Control concepts. What he taught me was there is no magic formula to any of this. It is a matter of re-connecting with the best part of yourself. Then there is no stopping you.

Charley moved back to Southern California were he is re-engaging in a busy, rich, full life and career. He has been pain free for over 10 years. We recently shot a short video to encapsulate his story and discuss his last ten years. He has not only remained active but has launched in a massive startup company. He will be the first to tell you, as will I, that this is not a straight-line journey but overall incredibly rewarding and you will connect with your capacity to create whatever life you wish.

We have become good friends and regularly stay in touch. I appreciate his willingness to share his journey with you.