Research has shown that the impact of chronic pain on your quality of life is more severe than heart failure, renal failure, or major depression and comparable to suffering from terminal cancer.1,2 Failing to adequately treat and solve chronic pain has major consequences, which include these systems:3,4,5

Why are there so many different symptoms and illness connected to chronic pain? You must consider the situation from the opposite perspective. Chronic mental/ physical illnesses and diseases occur when your body is exposed to sustained levels of inflammation, stress hormones and elevated metabolism (rate that fuel is consumed). This is the state of your body when it is under prolonged threat and no living organism can thrive in this scenario. Chronic pain is simply one of these diseases states. Your nervous system is inflamed and sensitized. Your speed of nerve conduction is faster, and you feel more pain.

The essence of the solution lies in lowering this physiological threat response. Since there are so many factors affecting the final expression of chronic disease, it always requires an approach that addresses all the relevant variables. It can be compared to fighting a forest fire.

Someone has to be in charge

If a wildfire becomes too large, a general call for help is sent out. The first fire chief to arrive on the scene is the one in charge and sets up the base of operations. He or she has to coordinate the effort. The person that must take charge of your chronic pain is you. You are unique and even if your doctor could spend hours with you assessing your situation, he or she could not really know your life in enough detail to solve your problems. You are the only one who is experiencing your life through your eyes.

Extinguishing the blaze requires assessing the situation, containing it, and taking away its fuel. It requires multiple possible strategies depending on the height of the flames, local terrain, weather, and many other factors. For example, fire travels more quickly up a steep hillside, especially when it is dry and fanned by a strong wind. Compare that to a brush fire on flat land, without wind, and it’s raining.

Every intervention at containing the fire is important but they must be implemented simultaneously. They all contribute and count. 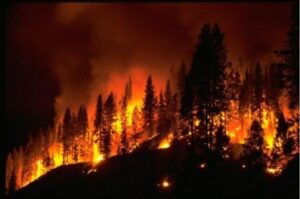 Lack of sleep, anxiety, anger, inflammation, stiff tissues, lack of conditioning, high narcotic doses, and staying focused on every detail of your pain, amongst other factors, add fuel to the fire. It’s illogical to think that there would be one answer that could resolve your pain – especially surgery performed without a clear-cut source of symptoms. This is especially true in light of chronic pain always becoming a neurological problem after three to six months regardless of whether the original problem was from an identifiable structural source. Your pain will become embedded and memorized in your brain with repetition. So, interventions focused primarily on anatomical abnormalities wont’ work.

The dark side of surgery for chronic pain

There is ample data that shows that performing any surgery in the presence of untreated chronic pain, such as a hernia repair, can induce chronic pain at the new surgical site lasting up to a year 30-40% of the time. There is a 5-10% chance of it becoming permanent.6 Chronic pain is seldom mentioned as a complication of surgery. Operating in the presence of a fired up nervous system is risky. It’s adding even more fuel to the blaze.

If I told you that I had a 5-10% chance of cutting the nerve to your foot so you could not lift it up, you would probably opt out of the surgery. However, a foot drop is painless and much better tolerated than ongoing burning sensations down your leg. Patients underestimate the terrible impact of living in chronic pain, and they can’t remotely comprehend how much worse they could be with ill-advised surgery. It is the reason I wrote my book, Do You Really Need Spine Surgery? Take Control with a Surgeon’s Advice. It breaks down the decision down to two variables – the nature of the anatomy and the state of your nervous system.

Put the odds in your favor

I routinely saw patients who had been referred for surgery, who hadn’t slept well for a couple of years, were experiencing severe anxiety, and understandably angry. How do you think surgery works in this scenario? It’s possible to have a successful outcome, but it is much lower than when these issues are dealt with, and the nervous system is calmed down. The tragedy is that these patients were understandably desperate for a way out of their pain and were susceptible to a surgeon recommending a major intervention – even without data to support it.

If a patient immersed him or herself in an organized self-directed program, he or she would improve or become pain-free the vast majority of the time – with or without surgery.  Energy levels rose and creativity re-entered their lives. Some people would have dramatic shifts within weeks and others would not hit that point for a year or two. Most people experienced significant improvements within three to six months. BTW, this approach of rehab before surgery for chronic pain in any part of the body has been documented to be necessary and effective in thousands of research papers.

Deb’s journey out of pain

Deb is a social worker with a lot of energy. On a given week she had at least three or four projects going and employed over 40 people. About six years before I met her, she developed neck pain during a period when she was under a lot of work stress. It began as tightness in her neck. She had also been in several car accidents over the years. It persisted and evolved into a full-blown chronic pain problem. She’s quite focused and was so determined to find an answer that she did her Ph.D. thesis on chronic pain. She still couldn’t solve it.

She attended the first Omega workshop in 2013 that I put on with Dr. Fred Luskin, author of Forgive for Good,7 and my wife Babs, who is skilled in rhythm and movement. It was a five-day course that incorporated all of the principles of the DOC Journey including play. We had 11 participants that year and most of them experienced a significant improvement in their pain during the week. She wasn’t one of them.

We kept in touch, and she emailed me about ten months later to let me know that she had broken out of the pain cycle. The combination that worked for her was the expressive writing, restful sleep, discontinuing physical therapy, taking glucosamine and eating an anti-inflammatory diet. She was already aware of the role of forgiveness. I’ve kept in close touch with her and she’s continuing to do well many years later.

The DOC Journey is a framework that breaks down the complexity of your pain into definable parts and presents a sequence of research-based treatments. They are easily accessible on a platform that allows you to find your own solution. Every treatment has some impact on decreasing your pain, but none of them work in isolation. It is always a combination of interventions that allows you to escape from the grip of mental or physical pain. It is remarkably similar to containing a forest fire and you are the one in charge. 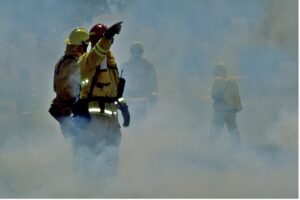