After you have become comfortable with writing down and immediately destroying your thoughts, the next phase involves the “three-column technique that Dr. David Burns outlines in his book, Feeling Good. It provides an excellent format in which to apply the principles of cognitive behavioral therapy in a self-directed manner.

I personally used the book extensively for many years, and the three-column technique was a major factor in pulling me out of my free fall. In 1997, I realized that it was a tool I could use in my own practice, and I liked using it because it was so much faster than trying to get someone to see a pain psychologist. They could engage almost instantly and often aggressively. This book was the entire component of the stress management  for the DOC Project for many years. I originally told my patients that if they could obtain some stress management skills, they would cope with it better. I was surprised to see many patients report both a better quality of life and a significant decrease in pain. However, it was puzzling to me why some patients would respond so much better than others. It eventually became clear that the patients who did well were the ones who participated in the writing process. The results have been consistent. Patients who commit to a daily writing process, based on the suggestions in the book always have a significant response.

His book is a wonderful book, but I have them initially read only the first third of the book to get started in the “three-column technique.” He outlines ten “errors in thinking.” They cover the range of cognitive distortions. We all use them a lot, as that is how we were raised. Some of the categories he describes are:

In the first column you write down your “ANT”.  That stands for “automatic negative thought. This step represents the first step of stimulating neuroplasticity, which is increasing the awareness of the disruptive thought. 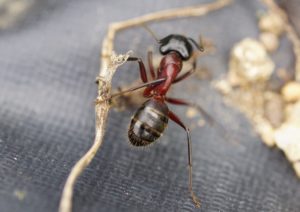 Then you write down the “error in thinking” that the thought represents in the second column. As you categorize the thought and understand the effect it has on your peace of mind, it separates you from it.

In the third column you write down the more rational thought. The more specific you are the better. This is the phase of burning a new circuit.

For example, your son may have just flunked a test. Your first response might be, “He is lazy and stupid.” You would  write those thoughts down in the first column. In the second column you would note that represents “labeling”. In the third column you might write, “My son just flunked a test. I wonder why. Is he being bullied at school? Could he be depressed? I am going to try to find out what is going on.” Positive thinking would be represented by, “He isn’t lazy.  He is my son and I love him.” That might be it. Except, without writing the more specific rational response, your thoughts might start spinning around. By the time you actually talk to him, you might not be in a great frame of mind.

The technique is effective for most people and it certainly was for me. The key to keep in mind is that the writing is only a starting point in the healing journey.