A friend of mine, Dr. Bruce Lipton, coined a term that I felt was relevant to our discussion on how we tend to adopt and remain in a victim mode. We know that the most stressful situations are those that are beyond our control, and it is also stressful trying to avoid stress. It is much more productive to learn to skillfully process it in a manner that has less of an impact on your nervous system and makeup of your body’s physiology. However, there are stresses that we unnecessarily create for ourselves. One common way is to not recognize our “errors in thinking” called “cognitive distortions. The other is mentally getting and remaining upset about situations that we have absolutely no control over.  His term for this tendency is “stupid stress.” It sounds harsh and it is. But think about it. We have enough to legitimate worries already. Why do we do this?

Anger is a powerful force and intended to keep you safe. It is a basic reaction and necessary to stay alive. Every living creature exhibits some version of it. Humans are different only in they uniquely possess language and a consciousness. We have to navigate a whole different level of threats not present in the animal kingdom. They are deadly in that neuroscience has demonstrated the unpleasant thoughts and emotions are processed by your body as physical threats, but you cannot escape from them. So, there is a baseline level of threat that is present that can become disruptive for many people – maybe most of us.

The essence of humanity – vulnerability

We don’t want to give up our anger because we’ll feel vulnerable, and there are few, if any rewards, in nature for being that way. You won’t survive. What is perverse about the human condition is that the best part of it is having enjoyable relationships with others, which requires awareness and vulnerability. But you cannot give up anger until you can allow yourself to tolerate uncertainty.

There are many ways of holding onto anger, with one of the more common ones being that of taking on the world’s suffering. You can remain angry indefinitely because there is little you can do about most of it. You can only make a difference in your own sphere of influence. Continuing to be upset about circumstances beyond your control, not only drains your energy, but if sustained, translates into unfavorable body chemistry with a much higher chance of developing a serious illness or disease.

Taking on the world’s suffering

There are plenty legitimate reasons to be upset or even enraged in this era of COVID, partisan politics, racism, homelessness, class inequities, elder and child abuse, human trafficking, terrorism, religious/ political persecution, and the list is endless. Which ones are you the most upset about? I have my top five. 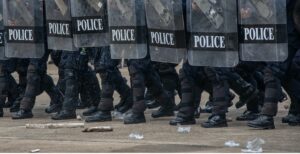 Here is a letter from an old high school buddy of mine that reflects the problem. He is suffering from ongoing disabling back and leg pain.

“…… violence in nature is difficult for me, but human cruelty to others is incredibly upsetting. I have been this way since childhood. I am very sensitive and I almost do not feel at home on this planet. I feel wired and tired at the same time.”

Meaning in the midst of suffering

I suggested that he read two books. One was Man’s Search for Meaning by Viktor Frankl.1 He was an Austrian psychiatrist who survived the WWII concentration camps and found meaning and purpose in the midst of extreme suffering – even his own.  He made  a choice to thrive regardless of the incredible misery he was immersed in. Few people could accomplish what he did, but he did show us what was possible. There is always a choice regarding how we deal with our daily adversities and the cruelty of the world. Of note, many camp survivors understandably did not do well after the ordeal because of severe PTSD, while he went on to a brilliant career and was a prolific author. 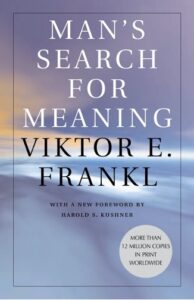 The other book was The Swerve by Stephen Greenblatt2 that tells the story of the discovery of an ancient Greek manuscript that contained the poem, The Nature of Things written by Lucretius. This finding was a factor in ushering humanity out of the dark ages. This book takes you into the lives of people living in the 1400’s – the Dark Ages. The extent of cruelty is indescribable and most of the population was controlled by fear and terror. We are fortunate to live in an era that has some level of freedom, although this is unfortunately still not true for many people. However, this reality was the norm for most people for thousands of years. Somehow, Lucretius, in the midst of the darkness of living in ancient times pointed out that all each person can and should do is to live a full, rich and meaningful life. 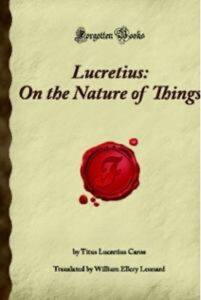 No one is asking you to be happy about the extreme suffering experienced by many at the hands of others. You don’t have to accept it. However, it is important to do whatever you can within your power to make the world a better place. Mentally taking on the totality of the misery of the world and remaining upset is common way of remaining in the victim role. Your life energy is diminished and the net result is that you are not able to be a source of light to those close to you.

Heron stands in the blue estuary

This is a powerful metaphor for us in that we are responsible for only what is in front of us and within our control. Conserving your energy allows you to act decisively and quickly when it is required to do so. Remaining agitated drains you and is not helpful. 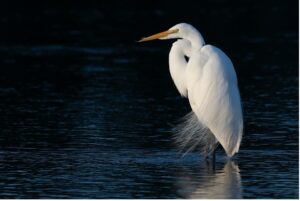 These books drove home that the history of the human race is largely extreme suffering, and we are the lucky to be alive in this modern era in spite of the ongoing challenges. I easily can get stuck on what is wrong and contribute to the world’s collective suffering, or I can step up, learn to enjoy my life, and be a conduit for happiness. This is a choice to be made multiple times every day.

The essence of healing is using tools and approaches to minimize your exposure to threat physiology. Your chemical state is partially determined by the nature of your input. If you are agitated for any perceived or legitimate reason, your body chemistry will be altered.

Choosing to remain angry about situations that are beyond your control is a sure way to remain upset. It creates a negative baseline perception of life, and makes it more difficult to find enjoyment, which is a physiological state of safety and is the essence of healing.

Letting go of situations that you have no control over frees up a tremendous amount of energy to live a more fulfilled and pleasurable life. You are then able to contribute to the well-being of those close to you. Letting is a learned skill and requires a sequence of steps to acquire it.

This post presents a common way of being and remaining a victim. You may not yet see how this term even applies to you. But it is universal, and anger is an essential  of remaining alive. It is just that you want your anger to be situation specific, appropriate, and time limited. The first step in moving forward is always being aware of where you are.